Stretching metals, in the form of springs or wires, can introduce graphical methods of general importance. It's also the basis for many practical devices. And it gives clues about forces between particles inside metals.

Students make their own springs and use them for investigations involving simple graph construction.

Students should clamp their stand to the bench to prevent it from toppling.

Students must wear eye protection. Eyes may be at the same level as clamp and the nail.

Use new copper wire. Old wire is often uneven in its hardness as working of copper wire hardens it. Also, twisted wire will produce uneven springs. You can use the wire afterwards for chemical and electrical work.

How Science Works Extension: The results of this extension can be summarized as Hooke’s law. This experiment thus gives an opportunity to discuss what is meant by a ‘law’ in physics, and the etiquette of scientific publishing. “ceiiinosssttuv” “Ut tensio, sic vis.” “As the extension increases, so does the force.”

This experiment was safety-checked in September 2004.

The behaviour of springs provides a topic through which students can learn about simple relationships between pairs of variables, in a practical context. Seventeenth-century scientists, like Robert Hooke and Robert Boyle, helped to lay the foundations for physics and for other sciences by working in this way.

Students should clamp their stand to the bench to prevent it from toppling.

Students must wear eye protection. Eyes may be at the same level as clamp and the nail. Also, steel springs store more energy elastically than copper springs and can fly off their supports.

Provide spare springs. Students will stretch springs beyond their elastic limit and replacements will be necessary. This is not willful destruction but, rather, good science.

If the springs are supplied close-coiled it is better to have the coils separated before issuing them to the students. Hanging about 500-600 g gently on the tightly coiled springs will do this.

The behaviour of a metal when it is subject to a stretching force reveals clues about the forces between its particles.

Students must wear eye protection. Though copper wire does not fly as wildly as steel wire when it breaks, the loose ends nevertheless present an eye hazard.

Warn students not to lean over as they pull on wires, to avoid the possibility of falling when the wire breaks.

A fresh piece of wire with no bending or kinking in it is needed for each extension.

This experiment was safety-tested in September 2004

With a little ingenuity, even a small change in length of a wire becomes measurable.

A copper wire does not break as violently as a steel wire. However, it is wise for those close to the demonstration (including the demonstrator) to wear eye protection.

The apparatus should be assembled before the lesson, to save lesson time. In particular, the thread should be glued to the wire, long enough in advance to ensure that the glue has set.

A fresh piece of wire is needed for each extension with no bending or kinking in it.

This experiment was safety-checked in September 2004

Though we might claim to know, intuitively, the difference between a large force and small force, we resort to the extension of springs for actual measurement.

The forcemeter scales need to be blank. You can achieve this by covering the scale of calibrated spring balances with ‘write on’ sticky strips.

This experiment was safety-checked in September 2004.

To look at a material that does not obey Hooke’s law.

Fishing elastic (used by anglers to give a bit of stretch to their lines) comes in a range of thicknesses. Students could investigate the stiffness and breaking strength as a function of thickness. 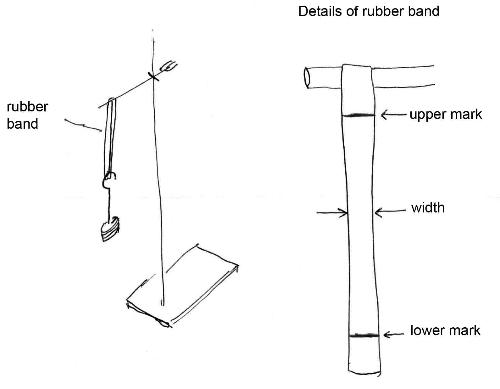 By stretching confectionery laces, students learn that extension is not always proportional to load. They also gain experience in adopting consistent procedures to make and record measurements.

Make sure that students do not eat the laces since eating anything in a laboratory is hazardous.

If the laces are sugar-coated, take care to avoid getting sugar into other equipment (open the packet over a sink). Wash off the sugar under a cold tap and allow the laces to dry before use.

Students observe brittle fracture during compression of a Crunchie bar, and take measurements to calculate its breaking stress. They appreciate that estimates can be useful.

Make sure that students do not eat the Crunchie bars, since eating anything in the laboratory is hazardous.

Construct the rig as shown in the diagram. 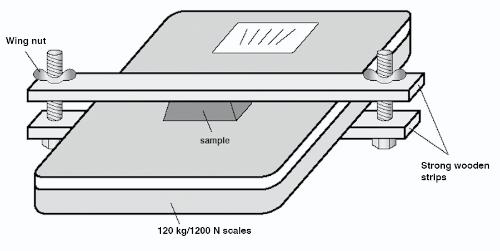 This experiment comes from University of York Science Education Group:

Diagrams are reproduced by permission of the copyright holders, Heinemann.

Explaining the deformation of metal solids

Explaining the deformation of metal solids

Both the repulsive forces between atoms and the attractive ones are electrical in origin. They arise from the charged particles composing one atom disturbing those of a neighbour, in ways that are specified by quantum mechanical rules. Since these forces are due to complexes of charges, they fall off more rapidly with distance than the inverse square law of force between isolated charges.

The attractions between atoms in metals are fairly short-range forces; two pieces of metal placed close together do not attract each other. Forces of repulsion must also be there or attractive forces would collapse solids. They cannot have the same falling off with distance as the attractive forces do, otherwise the atoms in solids would never settle down to a definite spacing as they do. So the repulsions are very-short-range forces, not appearing until atoms are much closer than when they first feel attractions. The repulsion rises sharply as atoms move closer together until it balances attraction.

The graph of force against distance between atoms looks something like sketch A. The graph of potential energy of two atoms looks something like sketch B. If there are only two atoms in a system, their equilibrium position will be ro on sketch A (where the resultant force between atoms is zero), or on sketch B (where the potential energy is a minimum). In practice, atoms do not settle down but remain in vibration about that equilibrium position. If you think of one atom as fixed, then the other one is, so to speak, sliding up and down the sides of the potential energy bowl around ro.

Hooke’s law (elastic) behaviour of a stretched wire: the stiffness (Young modulus) of a wire when stretched will depend on the way that its interatomic forces change near their equilibrium positions.

Plastic behaviour of a stretched wire: beyond the elastic limit, planes of atoms inside metal crystals slip over one another and so the wire is permanently deformed.