It is most likely that this will be a topic that is completely unfamiliar to all students from pre-16 level courses. It is also one where the impact on everyday life is apparently very limited and where students think that they have no direct experience of its consequences. Nothing could be further from the truth: e.g. all modern electronics relies on quantum physics.

However these very facts make it a most fascinating subject and one whose very novelty should attract the interest of your students.

Students may think that they have no direct experience of quantum physics and its consequences. Nothing could be further from the truth: e.g. all modern electronics relies on quantum physics.

Students should be familiar with the nuclear model of the atom. They should know that metals contain free (conduction) electrons.

These episodes (and work on lasers) lead on to general ideas about wave-particle duality.

This episode discusses: quantisation; energy levels in a hydrogen atom; and, distinguishing quantisation and continuity. And is accompanied by worked examples, student question sets, a student experiment and a demonstration.

Show a white light and a set of standard discharge lamps: sodium, neon, hydrogen and helium. Allow students to look at the spectrum of each gas. They can do this using a direct vision spectroscope or a bench spectroscope, or simply by holding a diffraction grating up to their eye.

What is the difference? (The white light shows a continuous spectrum; the gas discharge lamps show line spectra.) 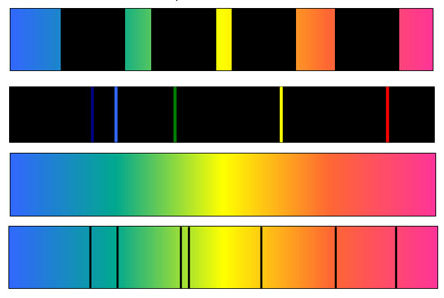 The spectrum of a gas gives a kind of finger print of an atom. You could relate this to the simple flame tests that students will have used at pre-16 level. Astronomers examine the light of distant stars and galaxies to discover their composition (and a lot else).

Discussion: The meaning of quantisation

Relate the appearance of the spectra to the energy levels within the atoms of the gas. Students will already have a picture of the atom with negatively charged electrons in orbit round a central positively charged nucleus. Explain that, in the classical model, an orbiting electron would emit radiation and spiral in towards the nucleus, resulting in the catastrophic collapse of the atom.

This must be replaced by the Bohr atomic structure – orbits are quantised. The electron’s energy levels are discrete. An electron can only move directly between such levels, emitting or absorbing individual photons as it does so. The ground state is the condition of lowest energy – most electrons are in this state.

Think about a bookcase with adjustable shelves. The bookshelves are quantised – only certain positions are allowed. Different arrangement of the shelves represents different energy level structures for different atoms. The books represent the electrons, added to the lowest shelf first etc

Throw a handful of polystyrene balls round the lab and see where they settle. The different levels on which they end up – the floor, on a desk, on a shelf – gives a very simple idea of energy levels.

Some useful clipart can be found below:

The absorption of a photon can raise an electron to a higher energy level. Alternatively the electrons can change energy level as a result of heating (which, in turn, can either be by absorbing radiation or particle collision).

When the electrons fall back to a lower level they emit a quantum of radiation.

Show a scale diagram of energy levels. It is most important that this diagram is to scale to emphasise the large energy drops between certain levels.

The students may well ask the question, Why do the states have negative energy? This is because the zero of energy is considered to be that of a free electron just outside the atom. All energy states below this – i.e. within the atom are therefore negative. The atom must absorb energy to raise the electron to the surface of the atom and allow it to escape.

Calculate the frequency and wavelength of the quantum of radiation (photon) emitted due to a transition between two energy levels. (Use two levels from the diagram for the hydrogen atom.)

Point out that this equation links a particle property (energy) with a wave property (frequency).

Ask your students to calculate the energy and frequency or a photon for one or two other transitions. Can they identify the colour or region of the spectrum of this light?

Emphasise the need to work in SI units. The wavelength is expressed in metres, the frequency in hertz, and the energy difference in joules. You may wish to show how to convert between joules and electronvolts.

The quantisation of energy is also rather like the kangaroo motion of a car when you first learn to drive – it jumps from one energy state to another, there is no smooth acceleration.

It is all a question of scale. We do not see quantum effects generally in everyday life because of the very small value of Planck's constant. Think about a person and an ant walking across a gravelled path. The size of the individual pieces of gravel may seem small to us but they are giant boulders to the ant.

We know that the photons emitted by a light bulb, for example, travel at the speed of light

(3 × 108 m s-1 ) so why don’t we feel them as they hit us? (Although all energy is quantised we are not aware of this in everyday life because of the very small value of Planck’s constant.)

Students may worry about the exact nature of photons. It may help if you give them this quotation from Einstein:

All the fifty years of conscious brooding have brought me no closer to the answer to the question, What are light quanta?. Of course, today every rascal thinks he knows the answer, but he is deluding himself.

Calculate the number of quanta of radiation being emitted by a light source.

The number of quanta emitted per second by the light

Students can use LEDs of different colours to investigate the relationship between frequency and photon energy for light.

Introduce the topic by demonstrating the electroscope and zinc plate experiment.

Point out to the students that the photoelectric effect is apparently instantaneous. However, the light must be energetic enough, which for zinc is in the ultraviolet region of the spectrum. If light were waves, we would expect the free electrons to steadily absorb energy from the waves until they escape from the surface. This would be the case in the classical theory, in which light is considered as waves. However, we could wait all day and still the red light would not liberate electrons from the zinc plate.So what is going on? We picture the light as quanta of radiation (photons). A single electron captures a single photon. The emission of an electron is instantaneous as long as the energy of each incoming quantum is big enough. If an individual photon has insufficient energy, the electron will not be able to escape from the metal.

Summarise the important points about the photoelectric effect.

Try this analogy, which involves ping-pong balls, a bullet and a coconut shy. A small boy tries to dislodge a coconut by throwing a ping-pong ball at it – no luck, the ping-pong ball has too little energy! He then tries a whole bowl of ping-pong balls but the coconut still stays put! Along comes a physicist with a pistol (and an understanding of the photoelectric effect), who fires one bullet at the coconut – it is instantaneously knocked off its support.

Ask how this is an analogy for the zinc plate experiment. (The analogy simulates the effect of infrared and ultra violet radiation on a metal surface. The ping-pong balls represent low energy infrared, while the bullet takes the place of high-energy ultra violet.)

Now you can define the work function. Use the potential well model to show an electron at the bottom of the well. It has to absorb the sufficient energy in one go to escape from the well and be liberated from the surface of the material.

The electronvolt is introduced because it is a convenient small unit. You might need to point out that it can be used for any (small) amount of energy, and is not confined to situations involving electrically accelerated electrons.

It is useful to compare the electron with a person in the bottom of a well with totally smooth sides. The person can only get out of the well by one jump, they can't jump half way up and then jump again. In the same way an electron at the bottom of a potential well must be given enough energy to escape in one jump. It is this energy that is the work function for the material.

Now you can present the equation for photoelectric emission:

Picture a photon transferring energy to one of the electrons which is least tightly bound in the metal. The energy of the photon does two things.

Some of it is needed to overcome the work function Φ.

The difference is the kinetic energy of the electron when it leaves the metal.

A voltage can be applied to bind the electrons more tightly to the metal. The stopping potential Vs is just enough to prevent any from escaping:

Set the students some problems using these equations.

The Millikan experiment question may best come after

(Some useful clipart is given here below).