Newton, as a young man of 24, guessed that gravity might provide the force to keep the planets in their orbits. Some simple demonstrations illustrate the connection between gravitational forces and planetary phenomena.

The inverse square law with light

The inverse square law with light

Observe the behaviour of light from a point source. Develop the idea of an inverse square relationship and then consider Newton's gravitational law.

With some exposure meters it may be necessary to reflect back some of the light to the reverse side of the meter in order to make the readings: a piece of white card will do this effectively.

Some exposure meters have scales marked so that adjacent markings represent light values increasing by a factor of 2 for each stop. Care must be taken when interpreting these.

Sketching a satellite orbit and predicting its period

Sketching a satellite orbit and predicting its period

Using a scale drawing to predict the time for a satellite close to the Earth. The results can later be compared with mathematical calculations based on v2/R.

Be careful with the thin wire, and avoid getting cuts to the hand.

This works best on the floor, or the side bench of a laboratory, with small groups of students.

The arc drawn is twice as long as needed for 2 minutes' travel, but the double length enables a symmetrical drawing which will yield a good estimate more easily. 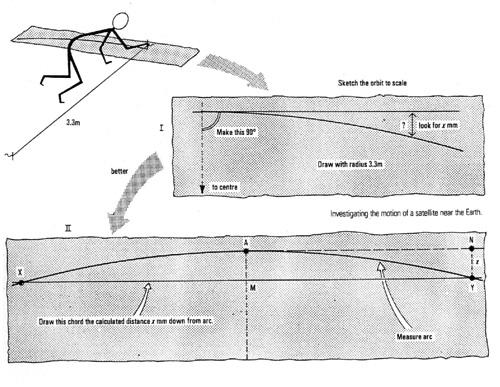 Angular momentum is conserved when the radius of orbit is changed.

Two pieces of V-channel should be cut and mounted on a base in a V arrangement.

The demonstration can also be performed using a solid CO2 system, mounting the channel on a glass plate and with a small piece of solid CO2 between it and the table so that there is a frictionless bearing for spinning. 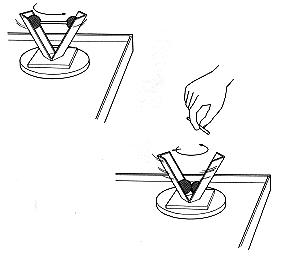 Model of the oblate Earth

Model of the oblate Earth

Simple model to demonstrate the ‘flattening’ of the poles as the Earth rotates. 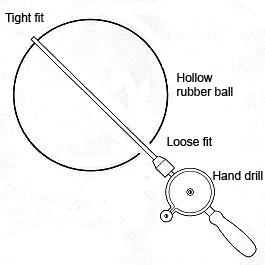 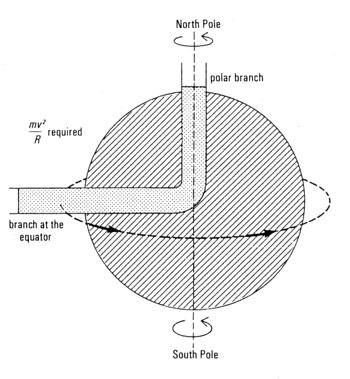 Using the model celestial sphere to show the precession of the equinoxes.

Model of the celestial sphere from the experiment

Take care with glassware. Keep the model out of sunlight as flask and water can act as a convex lens and produce localized heating.

Mark a new axis on the sphere, perpendicular to the ecliptic. This can be marked on the flask with small circles of coloured sticky paper indicating where the axis meets the surface. (An ideal arrangement is to fix two small suction caps at these points.) 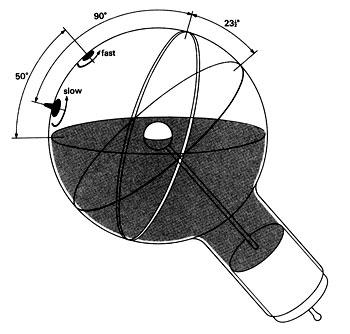 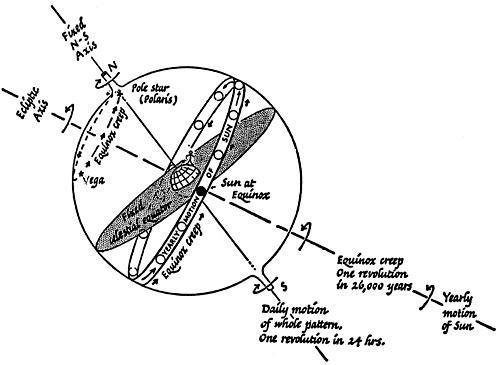 To show how the spin axis of the Earth rotates or precesses.

A suitable gyroscope is available from

Alternatively, a gyroscope can be made from a bicycle wheel; a front wheel, 46 cm x 3 cm is satisfactory. Two 10 cm lengths of alkathene rod (or similar) can be used for handles. Drill out the two lengths of plastic rod axially to a depth of 2.5 cm with a 6 mm drill. Screw them firmly on to the axle of the wheel to provide the two handles. Wear eye protection when drilling. The bicycle wheel is even better if it is loaded with a tyre of lead strip. Make sure the lead is firmly fixed to the wheel. 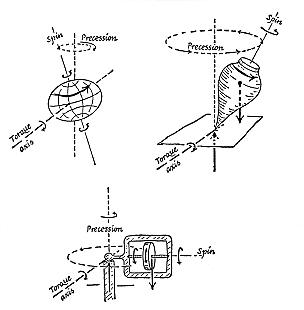 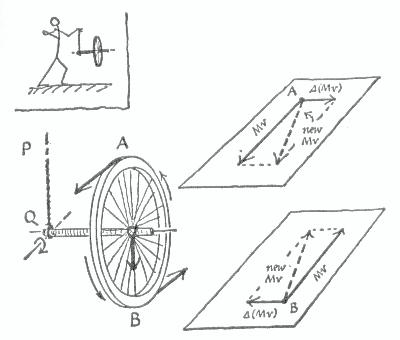 Model to illustrate precession of the Earth

Model to illustrate precession of the Earth

This demonstration imitates the Earth’s precession, with a spinning flywheel ‘rocked’ by the pull of a taut rubber band.

A small massive flywheel, which can be set spinning in a frame, is held by another frame hung by a long thread.

Nylon is suitable for the long thread used to support the apparatus because it does not make things spin when used for suspending an object like ordinary strings do. Any torque from the suspension will be unwelcome. 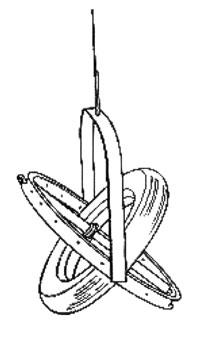 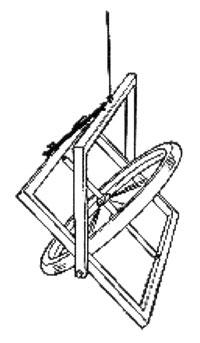 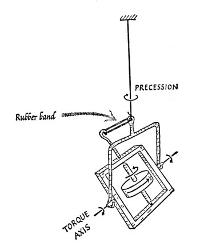 By the 17th century, people like Descartes and Newton were questioning the Greek view that the circular motions of celestial objects were natural.

For Aristotle, the answer to the question "why does an object go on moving?" had been "Because a force continues to push it along". Galileo suggested that no force is needed to keep an object moving with constant velocity. Newton took this as his first law of motion.

Newton's answer to "What force pushes a planet along?" was "No force is necessary, the motion simply continues". At the time, this was a revolutionary idea. Newton's explanation: an inward force is needed for a curved orbit, continually pulling the planet away from simple straight line motion. Any satellite must fall inward from the tangent to its circular orbit, again and again and again. That falling constitutes an inward acceleration.

Gravity, Newton argued, provides the inward pull acting on every satellite. The acceleration due to gravity is v 2R, where v is the satellite’s orbital speed and R is the radius of its circular orbit.