One evening on Mars

One evening on Mars - an activity

Gravity on Mars: This activity is to get pupils thinking and talking about the nature of the gravitational force. 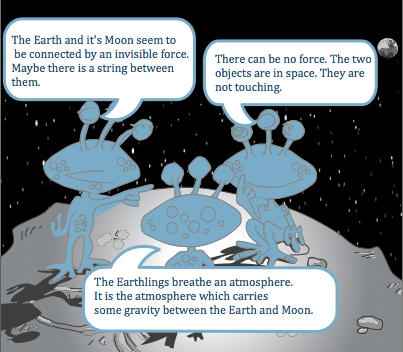 The picture should be used as a focus for small-group discussion.

The purpose of this activity is to get pupils thinking and talking about the nature of gravitational and magnetic forces.

This might be a demonstration accompanied by a gather-round discussion. With enough magnets it is an interesting challenge for pupils.

A string of paperclips is hung from a clamp-stand so that the lowest clip is just not in contact with the bench. A gap of about 1 centimetre remains. Next to this is a magnet held in place by a clamp. From the table a string of paperclips rises, attracted to the magnet and attached to the bench by Blu-Tak. Again there is a gap of about 1 centimetre between the top clip and the magnet.

This sets the scene for a discussion about the forces acting on the paperclips. The force acting in each case is a non-contact force. A sheet of paper can be passed carefully through the gaps and the paperclips remain in place. Hence both magnetic and gravity forces act through paper.

The mass of an object and the gravity force acting on that object.

The purpose of this activity is to get pupils thinking and talking about the difference between mass and force.

This activity makes a demand on literacy skills and encourages dialogue in groups. Pupils are given a short passage to read. The questions that follow should be tackled individually, then shared with partners and then larger groups.

Dan Smolski played American football at high school. He was always chosen for the school team because he was so difficult to tackle on account of his size. Dan was big for his age. At age 15 Dan weighed 700 newton.

His height and broad shoulders made him as big as the PE teacher. They both had a mass of about 70 kilogram and Dan's mass has not changed to this very day.

After studying mathematics at university, Dan joined the US Marines and eventually Dan was selected for special astronaut training. He had always wanted to travel into space.

Dan landed on the Moon in 2025 and became one of the first members of the Moon Marauders American football team, which plays all of its games in the special lunar astrodome constructed in 2021.

What was the gravity force acting on Dan Smolski before he blasted off for the Moon?

What was Dan's mass at this time?

Explain why Dan was so difficult to stop on the American football pitch.

When on the Moon, did Dan have the same mass as before?

What was the gravity force acting on Dan on the Moon?

When Dan played American football on the Moon, was he easier or harder to tackle? Explain your answer.

Dan was always concerned about his waistline. The bathroom scales showed a smaller weight on the Moon. Did his trousers still fit?

The purpose of this activity is to challenge the common mistaken idea that heavier objects fall faster than lighter objects.

Encourage pupils to predict which of two objects will hit the ground first when released together from the same height. Allowing pupils to feel the difference in the force of gravity acting on the two objects before release is important. Encouraging a dialogue about which of the two is being pulled with a greater force is also important.

It is likely that a range of predictions will emerge from the class. Invite pupils to share their reasoning for these predictions before they see the event.

Take care when dropping heavy objects. Bouncing masses can be dangerous, as indeed can be falling ones. Two blocks of wood, about 200 g and 800 g, will do the trick and will not be adversely affected by wind resistance over a fall of a few metres.

The Melon and Peach demonstration is also suggested as a teaching activity in the Gravity and Space episode in the SPT: Earth in space topic. Dropping a melon and a peach simultaneously from a great height (a second floor window is likely to prove suitable) will provide memorable proof that the mass of an object makes no difference to the rate of fall.

You should be aware of the mess which will be created by this demonstration. This can be minimised by placing a large plastic sheet on the ground. You also need to be aware of the fact that from too small a height the fruits will remain intact (no sensational explosion), while if they are dropped from too great a height air resistance might become significant and the two will not reach the ground simultaneously. The moral here is that practice makes perfect. This is certainly one of those demonstrations that makes physics fun and simply unforgettable!