Things you'll need to decide on as you plan

Things you'll need to decide on as you plan: Modelling Light with Ray Diagrams

Bringing together two sets of constraints

Teacher Tip: These are all related to findings about children's ideas from research. The teaching activities will provide some suggestions. So will colleagues, near and far.

Focusing on the physics:

Teacher Tip: Connecting what is experienced with what is written and drawn is essential to making sense of the connections between the theoretical world of physics and the lived-in world of the children. Don't forget to exemplify this action.

The physical and the model

Wrong Track: Rays set out from the lamp and hit the lens.

Right Lines: It's beams of light that you can see spreading across the benchtop. What we draw on paper represents rays, and these are a way of predicting what the beams will do.

Once a ray diagram has been drawn to represent a particular event, it can then be used to predict what will happen if any aspects of that event are changed. So ray diagrams are a predictive model. They might also be used to explain. This idea of building a model that mimics the beam behaviour is a key one to get established, so that pupils know what it is they're doing and why it's important.

The first point to make clear to pupils is that a ray diagram is a model of a real process and drawing one involves making various simplifications. For example, a source of light might be represented as a single point and an object with a complicated three dimensional shape might be shown as a flat opaque barrier. In drawing a ray diagram we move away from the structures of the real world to represent them in a conventional, theoretical way.

Making these kinds of simplifications may seem obvious to the experienced teacher, but they are unlikely to be so obvious to pupils. For example, when asked to draw a ray diagram of how a shadow is formed by a lamp, pupils might include irrelevant details such as a person standing in a room next to the lamp.

A theoretical construct, not a tangible entity

Wrong Track: I can see the rays we need to use.

Right Lines: You select (very carefully) rays to predict what you'll see on the bench top.

Ray diagrams are based on selected rays

Beams are what pupils see using lamps, slits and all the other apparatus on the laboratory bench top. Rays and ray drawings are used to generate models. It might help to allude to the idea of ray-tracing in computer-generated graphics as that clearly is not real, yet mimics the behaviours of the real (beams striking everyday things).

In any situation involving illumination, there are countless rays that might be drawn to represent light travelling from a source, striking surfaces, and so on. Drawing ray diagrams must therefore always involve the selection of key rays that enable the representation of a particular feature (for example, the extreme ends of a shadow or the position of an image).

It is a good idea to try to remember that the term ray has a special meaning in physics. It is a theoretical construction, a line on a piece of paper that we use to model real-world situations.

When describing an everyday situation, strictly speaking we should not refer to light rays travelling away from a lamp. It is sufficient simply to say that light travels away from the lamp. On the other hand, we can draw a ray diagram which predicts particular paths from the the lamp.

Teacher Tip: Remind pupils of the theoretical and modelled nature of ray diagrams. This might be reinforced by always referring to rays as drawn and not as travelling.

Some rules for ray diagrams, exemplified by your good practice

When pupils draw ray diagrams in their books you should insist on three things:

When you draw ray diagrams on the board or on a transparency:

This is definitely a case of the teacher setting the example to be followed! 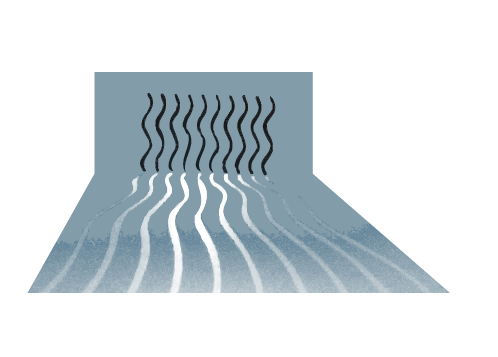 The devices used to cast narrow beams of light across bench tops are often referred to as ray boxes. That cannot be helpful, of course, since rays are not physical, but conceptual. You will not find a ray on the bench top unless you have constructed a diagram using one.

These devices are often used to produce two-dimensional physical depictions of ray diagrams on the bench top. If you look down on the pattern the light beams form on the bench top, then what you'll see closely resembles what is drawn to account for the action of the optical system (lens, mirror, or prism). As such, these are very useful devices to trace beams of light through two dimensional systems (the specialised lenses, prisms, and glass blocks that you'll find in laboratories).

If you think about the geometry for long enough you'll realise that the beams that these produce are not strictly two dimensional, as the light that is reflected from the bench farther away from the source must have started off higher up, farther from the surface of the bench. So if the slots in the front of the beam were wiggly, the resulting beams across the bench top – would be also be wiggly and without any optical devices at all.

Teacher Tip: Here's a special light source, that helps us focus on just some of the beams passing through a lens [adapt as appropriate], helping to show you how the diagrams we draw with rays explain the action of a lens.

Thinking about actions to take

Thinking about actions to take: Modelling Light with Ray Diagrams

There's a good chance you could improve your teaching if you were to:

Teacher Tip: Work through the Physics Narrative to find these lines of thinking worked out and then look in the Teaching Approaches for some examples of activities.

Teacher Tip: These difficulties are distilled from: the research findings; the practice of well-connected teachers with expertise; issues intrinsic to representing the physics well.