It can be easy to use a modern measuring device to make measurements without thinking about the underlying ideas. A serious look at measurement techniques will also reveal the meaning of these three fundamental quantities – mass, length and time.

A brief introduction to measuring mass by balancing.

This simple lever balance is made out of a lath of wood or a metre rule (with the graduations ignored) drilled with holes at the ends and centre, together with three hooks. It is not meant to produce accurate results nor is it meant to be an accurate part of teaching the lever law, though it could be an introduction. Suspend the simple lever by one of the hooks positioned centrally. It is convenient to support the hook from a clamp attached to a retort stand by a boss. Position the other two hooks near the ends of the lever at equal distances from the centre.

The sensitivity of the balance can be changed by adding a small load (e.g. Blu-Tac or a screw) on the lower edge of the beam, at the centre, to bring down the centre of gravity. Better still, drill another hole nearer to the top of the lath so that the lath is suspended with a lot of it below the suspension point.

A balance which introduces the principle of reading masses against a scale. 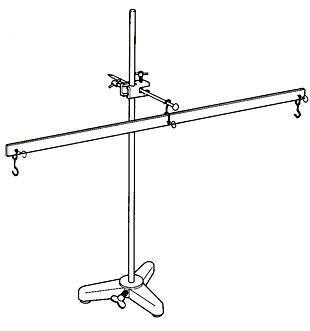 This simple lever balance is made out of a lath of wood or a metre rule (with the graduations ignored) drilled with holes at the ends and centre, together with three hooks. Suspend the simple lever by one of the hooks positioned centrally. It is convenient to support the hook from a clamp attached to a retort stand by a boss. Position the other two hooks near the ends of the lever at equal distances from the centre.

The sensitivity of the balance can be changed by adding a small load (e.g. Blu-Tac or screw) on the lower edge of the beam, at the centre, to bring down the centre of gravity. Or, drill another hole nearer to the top of the lath so that the lath is suspended with a lot of its mass below the suspension point.

Students can make an amazing instrument which is able to measure the mass of a hair or a grain of sand.

Take care with the needles. Issue them in a little plastic box so they don't become lost. 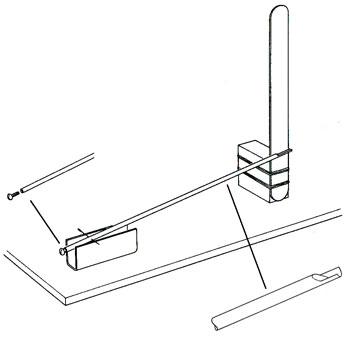 The aluminium support is made from a bent sheet of aluminium. An alternative support could be made from two plastic credit-card-sized cards, glued to a wooden block.

The screw should be the correct size to screw into the end of the drinking straw.

Have plenty of spare straws available.

A pile of graph paper can be used. It needs to have no margins on the paper and to have 10 x 10 large squares marked on it and each large square divided up into 10 x 10 smaller squares. The pile of graph paper should have a mass of 1 kilogram and this may be conveniently near to 1000 sheets. If this is not possible, then suitable values should be used in order to make the arithmetic easier, all the time discussing order of magnitude calculations.

NB: Paper changes in mass depending on the moisture content.

Practice at measuring and estimating lengths.

Students can then cut strips, glue them end-to-end, and make a 2 m rule.

Measuring the thickness of a coin

Measuring the thickness of a coin

Introducing the idea of measuring multiple objects and finding an average.

There is a significant risk that the coins will go missing! You could use steel washers as an alternative if you are concerned about this.

This experiment was safety-checked in July 2007

Measuring many sheets to find the thickness of one.

This experiment was safety-checked in October 2007

Measuring the thickness of aluminium leaf

Measuring the thickness of aluminium leaf

If students have made microbalances (see the experiment below) the microbalance used in this experiment should be their own. Alternatively, they will require access to a sensitive laboratory balance.

Aluminium leaf is the thinnest sheet of aluminium you can get, beaten out until it is so thin that it flutters in air and you can almost see through it.

Measuring the radius of a marble

Measuring the radius of a marble

Controlling the object you are measuring.

Care needs to be taken as there is a trip hazard if marbles fall and roll around the floor.

This experiment was safety-checked in December 2006

As many different time measuring devices as possible, including:

Some mobile phones also have in-built timers which can be used.

This experiment was safety-checked in July 2007

Drill a broom handle about 3 cm from the end to take a 15 cm nail. Push a wooden platform with a hole in it to take the broom handle over the handle. Secure it in place by a second nail pushed through a hole drilled in the lower end of the handle. This second hole should be about 110 cm below the top hole.

Screw a 25 mm round-headed screw into the bottom of the broom handle so that the head projects about 1 cm. Place two lengths of wood horizontally across two table tops. (Bricks resting on the ends will hold them rigid.) The pendulum is supported from these wood lengths, the 15 cm nail will roll on them. When stable, load the pendulum platform with two bricks, which can be tied into place.

Fasten a piece of thin card to a small block of wood. Position it so that, in swinging through the mid-position, the screw head which protrudes from the pendulum bob strikes the broad side of the card, making an audible click. Alternatively, amplify the sound this way: stick the card to part of a balloon which has been stretched tight and tied over the top of a 1000 ml beaker.

If the pendulum does not make enough swings, add more bricks to the platform.

Investigating the time of oscillation of a pendulum

Investigating the time of oscillation of a pendulum

If large masses are used then the stands may need to be clamped to the bench.

The verb to weigh and the noun weight are used in conflicting ways, even in science.

You cannot hope to clear up the great distinction between mass and weight by narrowing down the use of those common words. Nor can you exclude them or replace them in science. Students have to learn to live with their sloppy complexity.

Therefore, at an introductory stage you might use weigh it to mean put it on the balance and see what the balance says. Others will want to drop the verb to weigh and ask students to find the mass of the object.

Even that is not very helpful, because what the balance feels, and what I feel if I put the object in my hand, is a force that arises from the pull of gravity on the object. This force is the object's weight. With a balance we are comparing the weight of one object with the weight of some other standard thing, a standard kilogram. That comparison will give the same ratio if we can transport the whole experiment to the Moon, or anywhere else where the gravitational field is strong enough to make the machine work at all.

Whatever you decide to do about the distinction between mass and weight, it is important to use these terms consistently. The student should insensibly acquire the right idea by the teacher's care in their use. Actually, the distinction between mass and weight comes fairly easily to some students in this space age, so be prepared to make a short, general comment if a good occasion arises.

To many students, the image of science is one of exactness and perfection. And yet, good scientists make rough estimates again and again, sometimes without ever making a precise measurement. It is important to teach students that rough measurements are respectable.

Of course, high precision is of the essence in many cases. A modern mass spectrograph must yield measurements of high precision if tiny mass-differences between one atomic nucleus and another are to be interpreted as energy-differences using E = mc 2.

Yet when Chadwick measured the nuclear charges of copper, silver and platinum, by alpha scattering in 1920, relatively rough measurements showed Rutherford's atomic model was correct. Chadwick showed that the nuclear charge (in electron units) is just equal to the atomic number, the number of the element in the periodic table, a series arranged in order of atomic masses. Those answers were suspected from the general pattern of theory and had to be whole numbers since a complete atom (of nucleus plus outside electrons) is neutral. Much more precise measurements were neither needed, nor at the time, possible. Even before that, the first hint of atomic number measurements came in 1906, from Barkla's attempt to measure the number of electrons in a carbon atom by scattering X-rays. His measurements suggested a number of about 6 electrons per atom, in fact somewhere between 5 and 7, yet this rough estimate enabled the founding of atomic theory to proceed.

Galileo made the roughest measurements for his test of constant acceleration down an incline. He knew he was right in his simple summary of natural behaviour. He just wanted to convince some people by quoting an experiment.

Rough estimates are not just a misfortune peculiar to early, clumsy experimenters. They are the right thing in some parts of a growing science. Nuclear physicists and some cosmic ray physicists make very precise measurements. In other cases, they seek only a rough estimate to settle an essential point in the progress of their knowledge.

You cannot give the above examples to students if they do not know the science. In that case, the following may be some help.

"An invading army is about to go into a foreign land and the general wants to know the size of the enemy's forces. He learns that it is 18 000. Does it matter much to his plans if it is 19 000 or 15 000? What he wants to know is that it is about 18 000 and not 30 000. If he waits for his staff to carefully sift through reports and add up the guesses and check them and find that the enemy really has 18 473 men, then the general may set out too late to win the battle."