These materials have been adapted from the booklet ‘Making Energy Real: Using the SEP Energymeter’ published by the Gatsby Science Enhancement Programme as part of its ‘Innovations in Practical Work’ series. The booklet, the energymeter and other relevant practical resources can be purchased from Mindsets online.

The booklet and other supporting resources can also downloaded from the National STEM Centre website.

Getting to know the joule and the watt

Getting to know the joule and the watt

Students use a hand-turned generator to gain direct experience of measuring energy transfer and to get a ‘feel’ for the size of a joule and the size of a watt.

Using an energymeter to measure efficiency of energy transfer

Using an energymeter to measure efficiency of energy transfer

Students make measurements on the energy transfers involved when a falling mass drives an electrical generator, and calculate the efficiency of the process

Note: The apparatus should be placed on top of a box on the lab bench so that it gives a 1 metre drop above the floor. 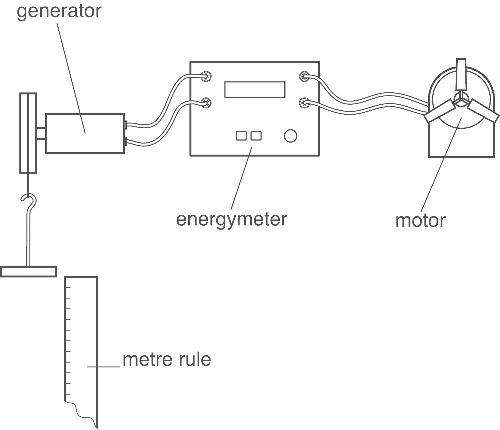 Using an energymeter to measure power in electrical circuits

Using an energymeter to measure power in electrical circuits

Students make direct measurements of power in various electrical circuits using an energymeter, and use values of voltage and current to calculate power.

Keep in mind that some types of battery (e.g. NiMH, nickel metal hydride) can give high currents if accidentally shorted.

One of the problems about teaching energy effectively is that there has often been an emphasis on learning about ‘accepted’ qualitative descriptions; the key idea that energy is a quantitative concept used to solve real problems tends to get lost. Many people have emphasized the importance of introducing younger students to the idea that energy is quantitative, for example, by comparing the energy values given on food labels. Using secondary data like this is very helpful, but is not a substitute for students getting hands-on experience of obtaining their own data through practical measurements.

The SEP Energymeter was developed to enable students to get direct experience of measuring energy and power in low-voltage circuits (it can be used in circuits up to 10 V). The intention was to produce a low-cost instrument that schools could afford to buy in sufficient numbers to maximize the opportunities for hands-on activity, and to complement the existing meters for the domestic market that measure energy consumption for mains appliances.

Concepts such as temperature and force are no less difficult and subtle than energy, but they have acquired an apparent straightforwardness because it is possible to measure them directly. Similarly, for energy, if students can make their own measurements it can deepen their understanding of the concept.

The energymeter is supplied with a 12 V DC mains adaptor which is plugged into a socket (5). When it is inserted, values will appear on the display panel (3).

The function knob (4) has four positions and allows the following measurements to be made:

The display of the energymeter automatically adjusts to use appropriate units for the values involved (for example, mJ, J or kJ), and automatically shifts the decimal point so that the display always shows values to three significant figures.

To measure the energy transferred from the batteries to the torch, the function knob is set to ‘Energy’ and the ‘start/pause’ button (6) is pressed. The display shows the total amount of the energy transferred, and the time elapsed since the button was pressed. Pressing the button again pauses the collection of data; pressing the reset button (7) sets the values back to zero.

With the function knob on the ‘Power’ setting, the display shows the value of the power at a particular moment in time (it refreshes every half-second).

The ‘Average power’ setting can be useful when there is a lot of variation in the power, such as using a hand-turned generator, a wind turbine, or a solar panel in varying light conditions.

To measure the voltage across the source and the current in the circuit, the function knob is turned to the ‘V, I and P’ setting. As well as voltage and current, the display shows the power (calculated from voltage x current).

The energymeter, in fact, works by measuring the voltage across the source and the current in the circuit, and calculating the power from these. From the power, it can then calculate the energy transferred over a period of time. The diagram below represents how the energymeter can be thought of as a combined voltmeter and ammeter.

Though the energymeter starts from measurements of voltage and power, conceptually, the sequence is reversed. Younger students can begin by using the energymeter to measure amounts of energy. They can then go on to measure power, developing an understanding that power is the rate of transfer of energy. Finally, older students can make measurements of voltage and current and relate these to power and energy.

There is a very wide range of experiments in which students get hands-on experience of measuring energy and power. The SEP publications ‘Making Energy Real: Using the SEP Energymeter’ and ‘Energy Storage’ give examples and suggestions for these.

These materials have been adapted from the booklet ‘Making Energy Real: Using the SEP Energymeter’ published by the Gatsby Science Enhancement Programme.