Introduction to rays and images

Introduction to rays and images

Rays of light can be observed in many different ways. In these experiments, students see light rays reflect and bend, produce shadows and images.

Shadows and rays on a screen

Shadows and rays on a screen

Shadows form on a screen when objects interrupt the light from a lamp.

Be aware that compact light sources using tungsten-halogen lamps without filters are significant sources of UV. Ensure that no-one can look directly at the lamps. 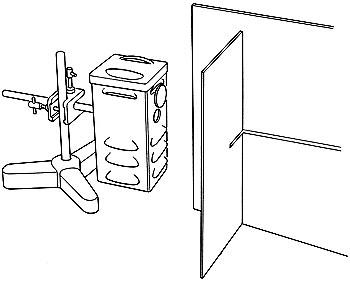 Ray of light in water

Ray of light in water

A light ray can be seen in water coloured with fluorescein.

Be aware that compact light sources using tungsten-halogen lamps without filters are significant sources of UV. Ensure that no-one can look directly at the lamps.

The compact light source will ideally consist of a 12 V, 100 W tungsten-halogen lamp in a suitable housing.

Fluorescein does not dissolve easily. Dissolve it first in a little alcohol, then dilute with water.

If fluorescein is not available, a few drops of milk will show up the beam by scattering the light. 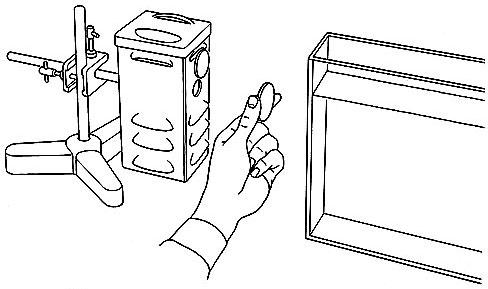 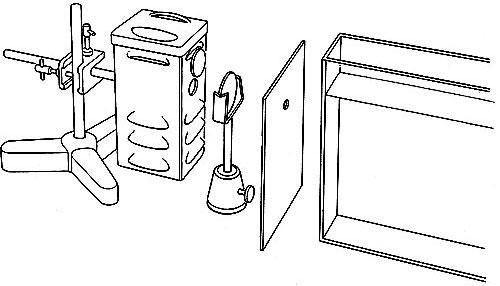 The purpose of this introductory demonstration is simply to show that light propagates along straight paths as rays.

A ray of light bends as it passes through a region of changing refractive index.

Although a class 2 laser is safe no-one should stare down the beam. If a laser is used, the tank should be viewed only from the front. (It is still worth doing with a laser as well as with a compact light source to show the laser beam being bent.)

Reflecting a ray of light and a rubber ball

Reflecting a ray of light and a rubber ball

Comparing the paths of a reflected ray of light and a rubber ball. 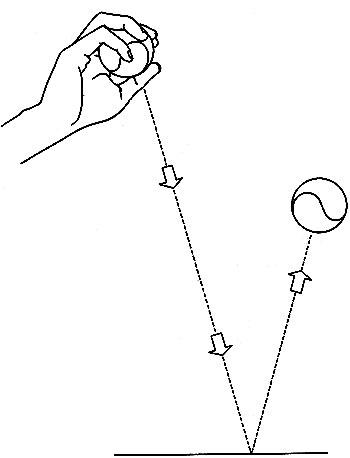 Shows rays forming an image in the smoke with a lens and a mirror, as well as the effects of chromatic and spherical aberration.

The method of making smoke with a bee-smoker is safe. Do not be tempted to generate smoke with chemicals. 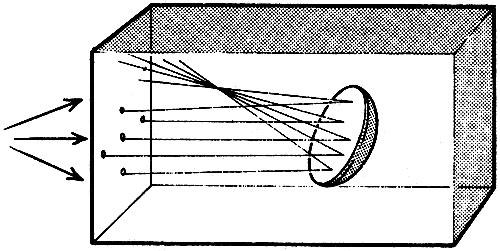 This experiment was safety-tested in December 2006

Investigating the formation of real images.

The plano-convex lens should be of condenser quality, about 100 mm in diameter, 150 mm focal length. A suitable lens is obtainable from Knight Optical, part number LPC15050.

The aluminium screen has a series of small holes drilled in a circle of about 50 mm diameter, so that a cone of rays is produced when a light is shone at it.

Image formation with a lens

Image formation with a lens

A set of experiments to introduce real and virtual images formed by a convex lens.

If the Sun is visible from the laboratory windows, it is essential for the teacher to remind students that looking at the Sun through a lens will cause blindness.

In the following description, the source of light is referred to as a window. In some cases an electric lamp may be better, as it can be used in a room that is at least half dark. A carbon filament lamp and mounted lampholder are suitable.

Making rough measurements to check the validity of a lens formula.

The lamp, if run at 12 volts, is too bright for viewing directly when looking at virtual images. It works well operated at 6 volts instead of 12.

Alternatively, you can use a pea-lamp, i.e. a round MES bulb.

If you have a telescope mount it makes a useful and cheap optical bench for these measurements.

At introductory level, simple experiments can help students to realize that light travels in straight lines and that an object is seen when light from the object enters the eye. A lens bends light rays so that the rays pass through an image point and we think we see the object at that point.

Treated as open-ended experiments they show students the way in which light behaves with real lenses in optical instruments.

Most of the experiments described on this website are suitable for intermediate level courses. After completing them, students should be able to draw a diagram of light rays (not formal ray construction diagrams) showing the following.

The real behaviour of rays falls short of the ideal of passing through images exactly. Students will see this and learn a little about correcting for that aberration.

The ray optics equipment suggested in these experiments looks simple, but some practical skill is needed to get the best out of it. Teaching notes provided with each experiment will help you ask the right questions of students struggling to get results.

You will be better prepared for student questions if you try out the experiments carefully beforehand. It is also advisable to read traditional textbooks that go beyond what students need to know for examination purposes. For example, knowing that the minimum distance between object and image is four times the focal length of a converging lens will enable a teacher to choose a lens that suits the length of a demonstration bench.

A well-organized cafeteria of equipment, under teacher control, will encourage students to do their own experimenting. In this way, extension work for faster students can be encouraged.

At intermediate and advanced level, ripple tanks can be brought in when needed, to show reflection or refraction for example. Wave theory predicts that all parts of a wavefront starting from a small light source arrive in phase at the image. This requires all paths from the object to take the same time.

The important thing in the argument about conventions is to choose one convention and stick to it. Advantages and disadvantages of the two common conventions are discussed below.

The Cartesian convention emphasizes the point of view which looks at a lens as changing the curvature of wave fronts going through it. One reason to do this is that it makes good sense of the reciprocal quantities in:

Thinking of a lens as adding curvature, the natural formulation is:

This convention also expresses the fact that the effective power of two thin lenses in contact is found by adding their powers.

In both conventions, diverging lenses have negative powers and converging lenses have positive powers. In the Cartesian system, it is advisable not to restrict the unit dioptre to lens powers alone, but extend it to 1/ v and 1/ u . Indeed, this must be correct if the equation is to have consistent units. Opticians always measure lens powers in dioptres, and so the unit itself is more than respectable.

It is better to express the lens equation in the form above rather than as:

where it may be less easy to recall which term is subtracted (though reading this as 'change in curvature = curvature provided by the lens' is quite natural).

In the Cartesian convention, distances to the right are positive and distances to the left are negative, just the same as for cartesian graphs. For a converging lens forming a real image, u is negative and v is positive.

The real is positive convention

Advantages: The merit of this convention is that it makes the lens equation simple and easy to remember. Double negatives, which can confuse students, do not arise in as many cases as with the Cartesian system.

Disadvantages: The real is positive sign convention is not used at all in professional work in optics, nor in ray tracing software which is readily available, and it obscures what is going on underneath. Some students get confused between the sign of (-1/ u ) and the sign of u itself.

Thanks to Dave Martindale for pointing out an error on this page, now corrected. Editor