Inertia is a powerful idea. Using many examples will help students to understand what it means.

The tendency of a body to resist acceleration is called its inertia. This experiment provides direct experience of applying force and experiencing inertia.

A ladder or step-ladder must be used when attaching strings to a ceiling beam. A ladder must be steadied by a second adult. If it is necessary to stand more than two metres from the floor, the worker must have been trained for work at height.

Ensure that students use this apparatus in a manner that creates no hazard for themselves or for others.

The string should be strong enough to support the load safely. 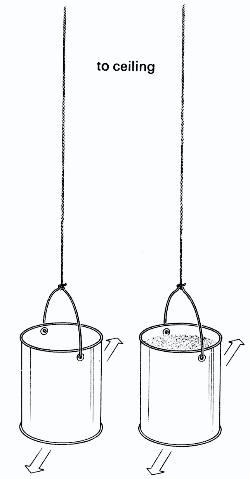 Inertia on a low friction surface

Inertia on a low friction surface

It would be best to avoid using polystyrene beads as an alternative to ball bearings. These are now classified as a dangerous substance because of the pressure generated when they expand.

If the glass plate is one metre square, it will require two persons to lift it onto the bench.

Ensure that the beads are not scattered on the floor.

A mounted glass plate provides a low friction surface, but other materials will serve. The surface must have a frame to contain the ball bearings. (Strictly these are the balls used to make ball bearings.

The number of ball bearings required depends on the size of the surface. There should be enough to spread quite thinly on the surface, so that the mass on the gas jar lid can move with little frictional resistance.

The ball bearings should be about 2 mm in diameter.

The inertia balance or 'wig-wag'

The inertia balance or 'wig-wag'

This activity shows that resistance to motion depends on the mass of the body being accelerated, rather than on its weight.

Do not overload the system, or the blades might buckle or snap. Test this safely before the lesson, and make sure that students cannot add an excessive load.

You can purchase wig-wags, but it is cheaper and not too difficult to make them. Use two hack-saw blades or equivalent lengths of metal strip, and place a block of wood between them at one end. This serves as anchorage to be fixed to the table. Place another block of wood between them at the other end, to act as the platform which carries the loads. 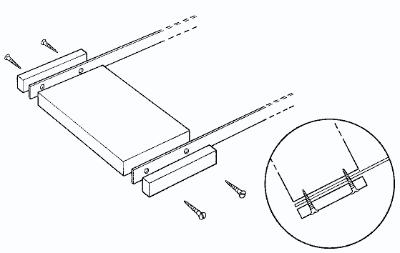 It is essential to clamp each blade very firmly on both sides of the blocks of wood. Place another small block of wood or metal outside the blade, flush with the main block, so that the blade emerges as if from the well-matched jaws of a vice. Then drive screws through the small blocks, through holes in the saw blades, and into the big block.

For a temporary balance, use a large G-clamp to clamp small blocks, both blades, and the large block together, in a multiple sandwich with a similar clamp at the other end. 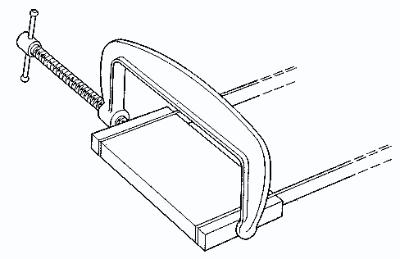 Cylindrical masses held in holes in the vibrating platform work well with this experiment, but are not essential (see illustrations below). 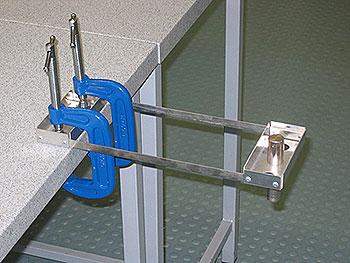 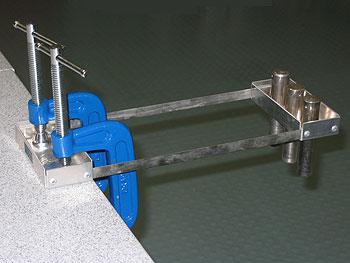 These are short activities, suitable for demonstration as a conjuring act.

Coin and tumbler One large mass Pile of books Horizontal snap Pile of bricks As a reverse form of 6, push a wooden brick in to replace the bottom one at the bottom of a pile of similar wooden blocks.

The effect of friction is reduced so that you can see that a pair of balanced forces produce zero acceleration: but not necessarily zero velocity.

The person standing near the additional (upper) mass to read the spring balance should be prepared to catch the retort stand should it topple over. 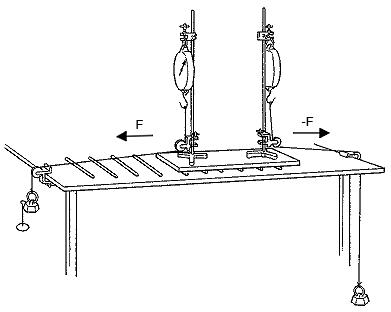 This experiment was safety-tested in April 2005

The plank should ideally be about 75 cm long.

If you are considering the forces acting on just one body, either law I or law II will apply.

The first law describes what happens when the forces acting on a body are balanced (no resultant force acts) – the body remains at rest or continues to move at constant velocity (constant speed in a straight line).

If a book is placed on a table, it stays at rest. This is an example of Newton’s first law. There are two forces on the book and they happen to balance owing to the elastic properties of the table. The table is slightly squashed by the book and it exerts an elastic force upwards equal to the weight of the book. You can show this by placing a thick piece of foam rubber on a table and placing a book on top of it. The foam rubber squashes.

Galileo was the first person to challenge the common sense notion that steady motion requires a steady force. He looked beyond the obvious and was able to say if there was no friction then an object would continue to move at constant velocity. In other words, he put forward a hypothesis. He could see that a motive force is generally needed to keep an object moving in order to balance frictional forces opposing the motion.

The motion of air molecules is a good example to consider with students. When air temperature is constant, no force is applied to keep air molecules moving, yet they do not slow down. If they did, in a matter of minutes the air would condense into a liquid.

So if the table mentioned above were in an upwardly accelerated lift, an outside observer would see that the two forces acting on the book were unequal. The resultant force would be sufficient to give the book the same upward acceleration as the lift. Put some bathroom scales between the book and the table. If the book is accelerating downwards, its weight would be greater than the reaction force from the table. The book would, however, appear to be weightless.

Mass is measured in kilograms and acceleration in m /s2. With an appropriate choice of unit for force, then the constant of proportionality, k, in the equation F = k ma is 1. This is how the newton is defined, giving F = ma or a = F / m.

Newton wanted to understand what moves the planets. He realized that a planet requires no force along its orbit to move at constant speed, but it does require a force at right angles to its motion (gravitational attraction to the Sun) to constantly change direction.

Newton’s third law can be stated as ‘interactions involve pairs of forces’. Be careful in talking about third law pairs (often misleadingly called ‘action’ and ‘reaction’). Many students find this law the most difficult one to understand.

Returning to the book on a table, there are three bodies involved: the Earth, the book, and the table. In this example, the interaction pairs of forces are:

In general, action and reaction pairs can be characterized as follows:

Mass is a difficult, strange and sophisticated concept but it is important to build up an understanding of it. Students may have been introduced to the word by teachers slowly introducing the difference between mass and weight and learning how to use the words correctly.

Experiments show that the more trolleys you pile together, the bigger the force which is needed for a given acceleration or the less acceleration we get for a standard pull. There is something about these chunks of matter that makes them difficult to accelerate; not difficult in the sense of a rough backward drag of friction but a sluggishness, a slowness to get moving. The effect of a small resultant force is slow but sure; you can get any amount of motion if you wait for it. Newton himself described mass as a ‘quantity of matter’. You could call it the amount of stuff related to the number of atoms in the object. This is inertial mass.

The weight of an object is the pull of the Earth on that object and so it is a force. Gravitational mass is what makes a body exert and experience a gravitational force.

Imagine experimenters in a space ship in outer space, free from a gravitational field, trying to pull a trolley along horizontally on a frictionless table. They use a spring to exert a pull so that the trolley accelerates. Then they hang the trolley vertically on the same spring, holding the top of the spring in one hand. They accelerate the trolley again by pulling it upwards with the spring. For the same stretch of spring in each case what differences are noticed between the motions? [none]

By drawing ‘leading diagrams’ on the board one can mislead students temporarily into believing that vertical and horizontal have real meaning and are different. They may realize they have been tricked. The directions may be at right angles to each other, but vertical is defined only where there is a gravitational field. Hopefully, they will be left with a feeling that mass is still there needing a force to accelerate it and gaining the same acceleration with the same force whatever the direction of the pull.

Early in the 20th Century, Einstein showed that the inertial and gravitational masses of any object are equivalent. The standard unit for mass is the kilogram which is the mass of a lump of metal kept in Sevres in France.

Inertia means ‘reluctance to change’. Inertia reduces a rate of change but cannot stop it. Inertia can take many forms, e.g.

You might help students develop a feeling for inertia by asking them:

In both cases, inertia keeps the object moving. A force is needed to change its velocity, but even the smallest resultant (net) force will do so.

Masses of objects can be compared in principle by seeing how their velocity changes compare, in response to the same force or in the same interaction.

Galileo thought that a ball, rolling or sliding down a hill without friction, would run up to the same height on an opposite hill.

Suppose that the opposite hill was horizontal. Would the ball's motion continue forever along the tangent, or forever parallel to the Earth's surface?

Galileo's conclusion from this thought experiment was that no force is needed to keep an object moving with constant velocity.

Newton took this as his first law of motion.