These experiments run from the 'feel' of a newton of force to the phenomenon of weightlessness.

This is a fairly elementary demonstration, but it will help students to develop a ‘feel’ for a newton of force, together with the concept of field strength.

This experiment was safety-tested in April 2005.

It may seem surprising that the motion of all objects falling freely under gravity is the same. Click here for a video showing free fall from which you can make measurements (please note this runs only in Internet Explorer 4+).

The objects should be dense enough and the length of fall small enough to make the effect of air resistance insignificant. 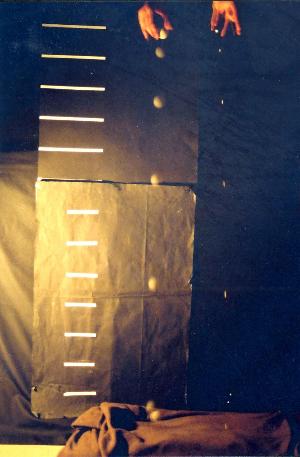 This experiment was safety-tested in May 2005

This experiment shows that it is not possible to measure the weight of a body in free fall using a forcemeter.

If it is necessary for the student dropping the forcemeter to stand on something, a 'kick-stool' as used in libraries or store rooms would be safest. Do not allow other students to stand close to the stool.

It is a good idea to highlight the pointer so that it shows brightly in photographs. Paint it white or cover it in foil.

This activity is suitable for multiflash treatment. Or you could make a video and play it back frame by frame. If a jump from a diving board is possible, then the student could hold a balance. 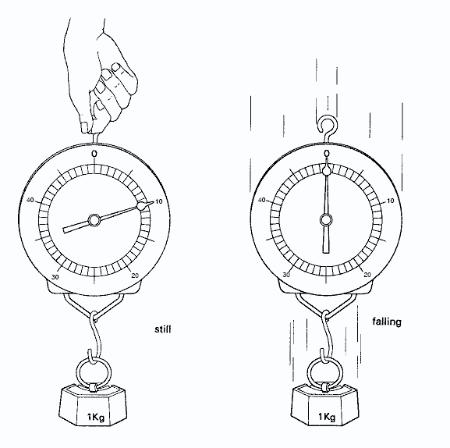 Glass tubing should have ends which are carefully annealed to withstand small shocks. Before evacuating the tube, ensure that there are no cracks and the outside should be covered in a spiral of Sellotape to help if the tube should shatter.

One end of the tube is sealed with a solid bung. The other has a one-hole bung with a glass tube through it. The glass is connected with pressure tubing to the vacuum pump.

This experiment was safety-tested in April 2005

An object in free fall is said to be ‘weightless’ but is better described as ‘apparently weightless’.

Questions about weightlessness are likely to come up when discussing satellite motion. In free fall, no forces other than gravity act. To someone in a satellite, or (hypothetically) in an ordinary lift after the cables have been cut, objects appear to have no weight. Something placed in mid-air will just float there. Video clips of astronauts show this vividly.

A stationary observer watching from outside the satellite (or lift) will see all objects falling in exactly the same way. They are all in free fall.

An object can only be truly weightless if there is no gravitational field. This would have to be infinitely far away from any other body. Or it could be at a point between two bodies, such the Earth and the Sun, where the pull of the Earth exactly balances the pull of the Sun. Or at the centre of the Earth, where an object would be pulled equally in all directions.

Conservation of Energy
Energy and Thermal Physics | Forces and Motion

You can transfer the image produced direct to a computer.

Play back the video frame by frame and place a transparent acetate sheet over the TV screen to record object positions.

You need a camera that will focus on images for objects as near as 1 metre away. The camera will need a B setting, which holds the shutter open, for continuous exposure. Use a large aperture setting, such as f3.5. Digital cameras provide an immediate image for analysis. With some cameras it may be necessary to cover the photocell to keep the shutter open.

Set up the stroboscope in front of the camera so that slits in the disc allow light from the object to reach the camera lens at regular intervals as the disc rotates.

Lens to disc distance could be as little as 1 cm. The slotted disc should be motor-driven, using a synchronous motor, so that the time intervals between exposures are constant.

You can vary the frequency of ‘exposure’ by covering unwanted slits with black tape. Do this symmetrically. For example, a disc with 2 slits open running at 300 rpm gives 10 exposures per second.

The narrower the slit, the sharper but dimmer the image. Strongly illuminating the objects, or using a light source as the moving object, allows a narrower slit to be used.

Illuminate the object as brightly as possible, but the matt black background as little as possible. A slide projector is a good light source for this purpose.

This provides sharper pictures than with a disc stroboscope, provided that you have a good blackout. General guidance is as for Method 3. Direct the light from the stroboscope along the pathway of the object.

In multiflash photography, avoid flash frequencies in the range 15-20 Hz, and avoid red flickering light. Some people can feel unwell as a result of the flicker. Rarely, some people have photosensitive epilepsy.

Use a white or silver object, such as a large, highly polished steel ball or a golf ball, against a dark background. Alternatively, use a moving source of light such as a lamp fixed to a cell, with suitable electrical connections. In this case, place cushioning on the floor to prevent breakage.

Use the viewfinder to check that the object is in focus throughout its motion, and that a sufficient range of its motion is within the camera’s field of view.

Place a measured grid in the background to allow measurement. A black card with strips of white insulating tape at, say, 10 cm spacing provides strong contrast and allows the illuminated moving object to stand out.

As an alternative to the grid, you can use a metre rule. Its scale will not usually be visible on the final image, but you can project a photograph onto a screen. Move the projector until the metre rule in the image is the same size as a metre rule held alongside the screen. You can then make measurements directly from the screen.

Use a tripod and/or a system of clamps and stands to hold the equipment. Make sure that any system is as rigid and stable as possible.

Teamwork matters, especially in Method 3. One person could control the camera, another the stroboscope system as necessary, and a third the object to be photographed.