Here are class experiments to find how the volume and the pressure of a fixed mass of gas vary with temperature, and how pressure and volume vary at fixed temperature. They also provide a means of introducing absolute zero and the Kelvin temperature scale.

Pressure of air at constant volume

Pressure of air at constant volume

Measuring the change in pressure when air is heated at constant volume.

Heatproof gloves will be needed to handle the flask and water bath after the experiment unless they can be left to cool down.

If a rotary vacuum pump is used, remember that it is too heavy for one person to lift or carry.

You can improve the accuracy of measurements in this demonstration by ensuring that the neck of the flask is in the water. This probably means using a clamp to hold the flask in the water. 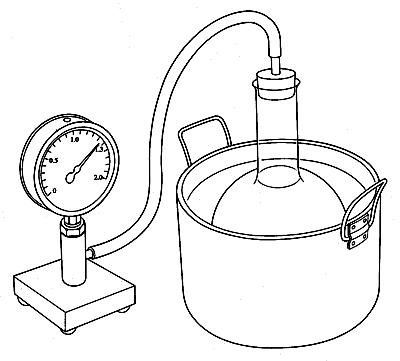 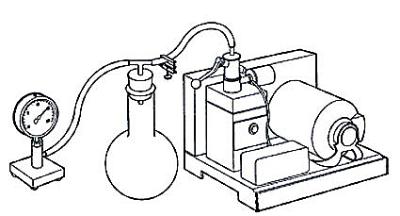 Expansion of a gas at constant pressure

Expansion of a gas at constant pressure

For each group of students

Warn the class to handle the long glass tubes carefully as they are (relatively) easily broken.

Glass test-tubes and corks with capillary tubing can be used in place of the flasks. The drop of oil is added to the bung-end of the tube before insertion into the flask.

Expansion of air at constant pressure and an indication of absolute zero (-273°C).

For each group of students

When you seal the tubes, avoid a long taper at the end.

It is almost impossible to obtain tubing with this bore and not a very thick wall: 3 mm outer diameter and 1 mm inner diameter is ideal. If suppliers will not stock it, this experiment could be omitted.

The beaker should be deep enough for all the air column in the tube to be immersed in water.

The capillary tubes should be about 20 cm long and 1 mm bore, closed at one end and open at the other.

To insert the index:

If a laboratory oven is available, the tubes can be heated to 120°C for about 20 minutes instead of using brine.

Sulphuric acid is hydrophilic; it removes water vapour from the air trapped in the capillary tube. If you do not like working with acid, the experiment could be tried with an oil plug but the water vapour pressure in the air column would then distort the results.

A quick, dramatic demonstration to show the pressure of a fixed volume of gas increases with temperature.

Safety screens are needed with the class sitting well back.

Heat-proof gloves should be available for retrieving the lid and the hot tin.

The tin should have a well-fitting, push-in lid.

To ensure a reliable result, it is not unknown for teachers to secrete a small amount of water in the tin before sealing with the lid. It is helpful to try out this demonstration before the lesson, allowing enough time for the tin to cool down again! (It has not been unknown for the lid to stay fixed in place even after several minutes heating of dry air only.) 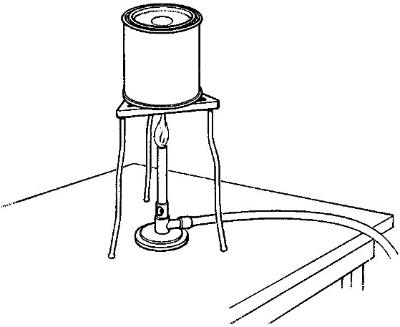 This experiment was safety-tested in March 2006

Variation of gas pressure with temperature

Variation of gas pressure with temperature

This experiment leads to the concept of absolute zero. Students investigate the effect of temperature on the pressure of a fixed volume of gas.

School kitchens might be a source of deep tins large enough to contain the flasks, stirrers and thermometers.

The flasks need to be immersed up to their bungs. Wire each bung to the neck of its flask so it cannot easily be dislodged. The stirrers need to be able to move past the flasks; their use is vital to the success of this experiment. 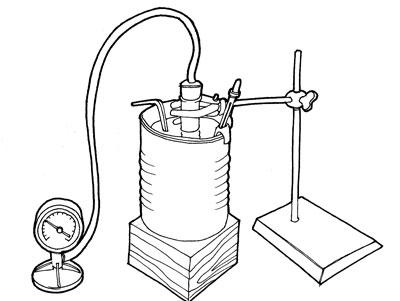 This experiment was safety-checked in August 2006

Warming up a gas by speeding up its particles

Warming up a gas by speeding up its particles

ALTERNATIVE method: demonstrates how compressing a gas increases its temperature. A small piece of cotton wool is placed into the bottom of a narrow plastic tube. When the air is rapidly compressed by a piston, the air temperature increases and the cotton ignites. The 'fire piston' can be used to illustrate the transfer of energy, kinetic theory and Charles' law.

This experiment was safety-tested in June 2004. 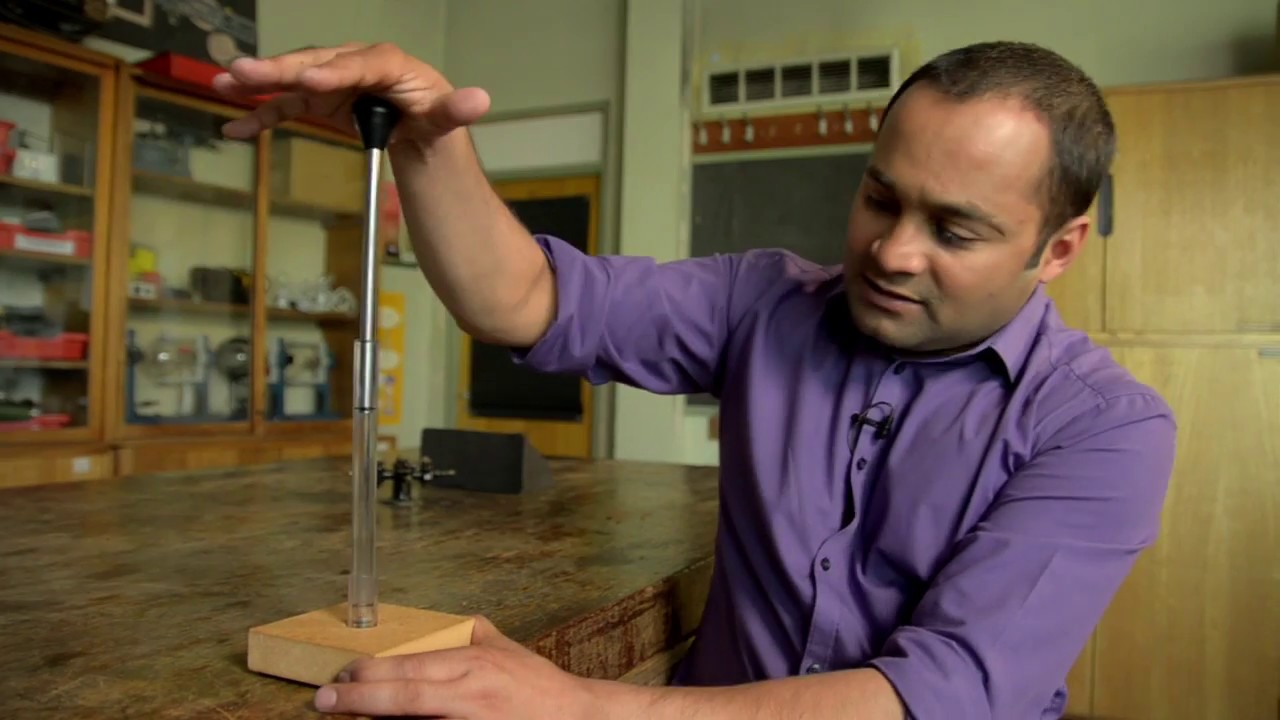 When students continue their graph (or calculate) on down to find absolute zero, they are making a risky guess that the behaviour of a gas would stay the same. Explain that continuing beyond all measurements like that is called extrapolation.

You could say that:

Extrapolation is a risky business, trusting or pretending that what you have observed continues on and on.

Suppose you were not a human being but were a butterfly who emerged from a chrysalis on a warm day in early summer and flew about from flower to flower, day after day. What would you observe about the weather? A fine day, another fine day, another fine day, ... If you were that insect, you might extrapolate and predict that every day in the future would be fine. You would not foresee the wintry day which would end your happy flights.

Extrapolation would be very risky if we trusted it for the molecules of a real gas like air or carbon dioxide. If we cool any gas enough, it fails to remain a gas, for example carbon dioxide becomes cold solid crystals of dry ice. Air that has been cooled down and pushed together so that its molecules (moving relatively slowly at that low temperature) hang together in a liquid.

Yet we can safely make the extrapolation in imagination and find a useful absolute zero as a starting point for the grand Kelvin scale of temperature.

Interpolation means reading something off a graph between two measured points on it. (Or you can calculate an intermediate value between two values given in some table.) Interpolation is useful in science and engineering; and, if carefully done, it is safe. But in developing new science and technology, extrapolation is more important.

Although extrapolation is risky, it is the way in which some of the great discoveries have been made. Scientists guess what might happen if they continued our knowledge into an unknown region, then they try to test their guess by experiments. And sometimes, those experiments lead them in quite a new direction of knowledge.

Extrapolation is rash but sometimes very fruitful; interpolation is safe but dull.

From the pressure law to the Kelvin scale

From the pressure law to the Kelvin scale

The experimental graph of pressure against temperature is likely to be straight enough to justify asking whether the plotted points (the true results of the experiment) fit closely to an ideal simple law. This is what we would like to find because it makes our description of nature easy and simple. If some students have graphs that do not seem to suggest a straight line, then a picture gallery of everybody's graph can be organized. That will enable the class to extract a general conclusion, as in a professional research team's work.

Then suggest each student should extend the line backwards to look for absolute zero. They can either draw new axes so the temperature scale can be extended backwards to about 300ºC below the ice point or pages of graph paper stuck to the original graph until the line cuts the temperature axis. It is also possible to calculate the position of absolute zero algebraically, using the slope of the line.

Get students to think on these lines:

"What happens to the motion of the molecules when you cool the air? Think of cooling the air more and more... could you cool it until its molecules had no motion at all? Suppose there was such a temperature: somewhere far down on the scale of the thermometer at which molecules would have no motion at all. What would the pressure be like at that temperature? If we trust our picture of gas models we expect the pressure to fall to nothing."

Students should emerge with a clear idea that, judged by a mercury thermometer, gas pressure runs down an almost straight line as temperature falls. The straight line reaches zero pressure at a temperature somewhere between -250ºC and -300ºC (-273°C), called absolute zero. Tell them this process of extending the graph backwards beyond the reading is called extrapolation. It is a risky process because we do not know if the gas will continue to behave in the same way.

You could ask students to imagine an ideal gas and discover what the temperature would be at which that gas would collapse with no useful motion.

"You will find that real gases give an almost straight line graph when their pressure is plotted against Kelvin temperature. The expansion of mercury happens, by a lucky chance, to give a fairly straight line when plotted against Kelvin temperature measured by a gas thermometer. That lucky chance makes it comfortable to use mercury thermometers for measuring ordinary temperatures in the laboratory. For higher temperatures, Bunsen flames, mercury thermometers are useless and in very cold weather the mercury freezes. The Kelvin scale extends from zero as high as you like, millions of degrees in nuclear fusion."