This collection has experiments where forces cause a variety of effects. There are instances of resistive forces - friction, solids falling through fluids such as air or liquids. Forces also cause objects to rotate. Insight into the lever principle is empowering because of its great range of applications.

Surface tension and the Bernoulli effect can be intriguing. They call out for explanation and so, at advanced level, easily lead on to discussion of relevant physical theory.

This is an exploration of which factors affect the force of friction when one surface slides across another and which do not.

Dimensions are for guidance and are approximate.

The faces of the block must be of equal smoothness. 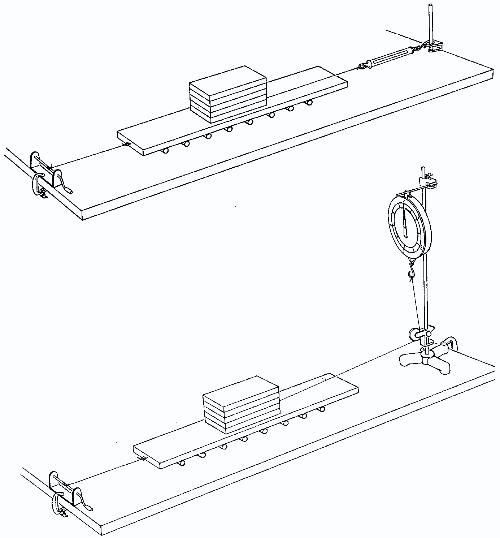 For each student group:

Unexpanded beads are now classified as a dangerous substance because of the pressure generated when they expand. Teachers must control access to the unexpanded beads and supervise this activity carefully to see that the beads are not removed for unauthorized experiments.

Styrocell beads are the raw material for making expanded polystyrene. There should be enough of them to provide each student group with between thirty and fifty.

They contain an expanding agent, which causes them to expand to forty or sixty times their original volume when heated up. You can expand them by boiling in water for five minutes. If you then allow them to fall freely in air, they will approach a terminal velocity in about 30 cm. They behave like slow motion raindrops. The unexpanded beads should be stored in a cool place, preferably in a sealed polythene bag. Expanded beads should be thrown away.

A drop of a wetting agent in the water will help to prevent beads from clinging to the surface of the water in the gas jar.

This experiment was safety-checked in September 2004

Ideas about terminal velocity and about streamlining can be quite difficult. This gives students some practical experience on which to build their understanding.

Students must NOT be allowed to stand on stools or benches in this activity. Serious accidents have happened as a result. Parachutes can often be dropped down stairwells providing pupils are adequately supervised. 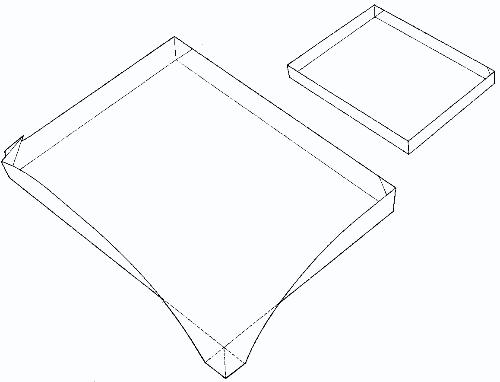 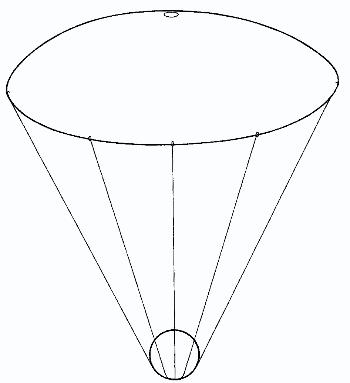 The higher the viscosity of a liquid the more it resists motion of a body through it. The result can be very low terminal velocity.

Glycerine (glycerol or propane -1, 2, 3-triol) will irritate eyes, so eye protection should be worn. Its properties will change if it is allowed to absorb water vapour from the atmosphere so it must be kept in a closed container. Waste engine oil is carcinogenic and must not be used.

A tall glass tube allows a greater distance of fall than a measuring cylinder. Seal the bottom end firmly with a stopper and rest this on a surface so that it cannot fall out. Do not over-tighten any clamp that you use to hold such a tube.

Use the pencil, pen or elastic bands to provide equally spaced markers on the measuring cylinder or glass tube. Do this before the lesson.

Place the ball-bearings in a dish of the same liquid before use. This reduces the occurrence of air bubbles, which will affect the motion of the ball bearings.

Retrieve ball-bearings from the liquid with a magnet outside the jar. This is a messy activity to clear away, especially if many ball bearings are allowed to fall and must then be retrieved. 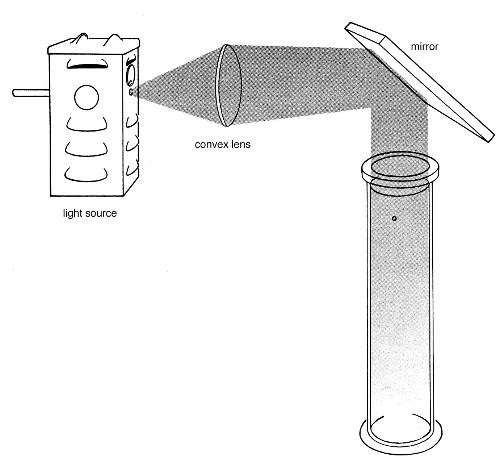 Science can reveal simple patterns with considerable predictive power. This is of huge practical value. Knowing what affects the turning of a balanced beam leads to understanding such a pattern.

These items of apparatus are available from educational suppliers as part of a "lever kit". 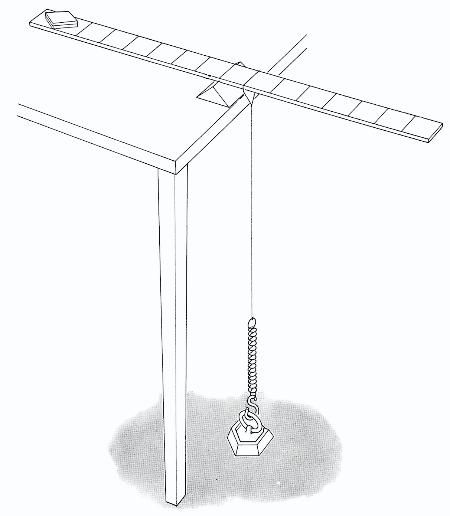 The game of Sym

The game of Sym

This is a fun challenge, ideal as an extension activity or just for some mind-stretching for its own sake.

These items of apparatus are available from educational suppliers as part of a lever kit.

Principles of physics are not just abstract. They have practical value.

If the weighing device is used to find the weights of students then a steadying rail must be available to avoid falls.

Students should be disciplined to avoid misbehaving if an attempt is made to find the mass of a student or teacher.

Turning effects and a clock-spring

Turning effects and a clock-spring

Springs tend to return to their original shapes when they are stretched, compressed, or, in this case, turned.

If loads slip along the arm of the spring, use small pieces of modelling wax or Plasticine to hold them steady. 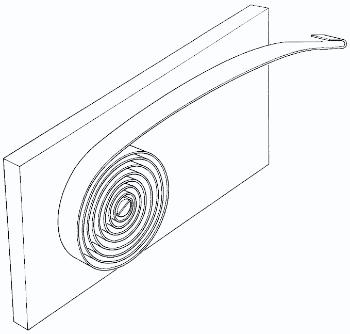 Surface tension in a liquid is an intrinsically interesting phenomenon. It also provides evidence in the human-sized world of the unseen inter-particle forces that cause it. 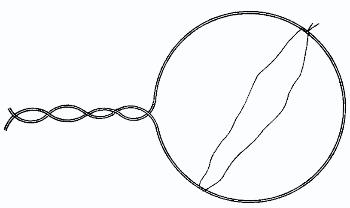 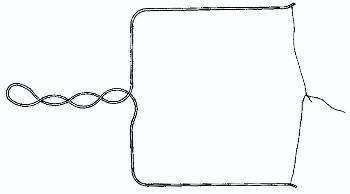 It is quick and simple to demonstrate that surface tension gives droplets a spherical shape.

The mercury experiment is best done as a teacher demonstration using a flexcam and screen, since working in a mercury tray obstructs the students' view. A mercury spill-kit should be to hand.

The waxed slides are difficult to clean for re-use; best to throw away.

This experiment was safety-checked in January 2005

In this experiment aniline drops grow in water. Apparently weightless (because aniline density is almost the same as water), the drops are perfect spheres.

Wear eye protection when handling aniline (phenylamine). If aniline gets on the skin, wash it off with soap and cool water.

Alternatively, use a larger beaker and a small funnel in the top of a burette, which is in its stand on the floor. After the demonstration, safe disposal is essential. Pour off the water to leave a puddle of aniline at the bottom of the large beaker.

Add about six times its volume of 2 M hydrochloric acid, stir and leave it in a safe place for 24 hours. Pour carefully down the foul-water drain (toilet) and flush it away.

A burette can be used in place of the separating funnel.

Aniline darkens with age so old stock is best. Aniline damages most plastics. If you use a plastic beaker, place a small glass beaker inside it to catch the aniline drops.

An alternative would be olive oil drops in alcohol, but aniline drops are more clearly visible.

This experiment was safety-checked in December 2004

Experiment to flatten the water curvature inside a capillary tube.

Use clean apparatus and water. Wash in strong detergent, rinse in clean water, then in distilled water and take care not to put grease from your fingers on it.

The height of the capillary tube should be greater than the height to which water will rise inside it. 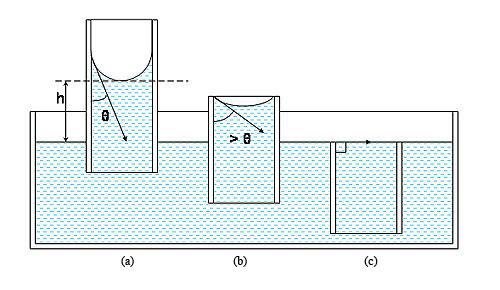 This experiment was submitted to the site by Shivaji Chelladurai who is a software architect working for Cognizant at their Chennai, India office.

In a streamline flow, fluid pressure will be reduced in a region where the flow velocity is increased, for example due to a constriction.

Suppliers of Bernoulli tubes include the following: EDU-LAB, Eisco Labs, and PASCO Scientific.

Take care when handling and clamping the Bernoulli tubes, fragile glassware. Be careful not to get water on the floor, which can create a slip hazard. 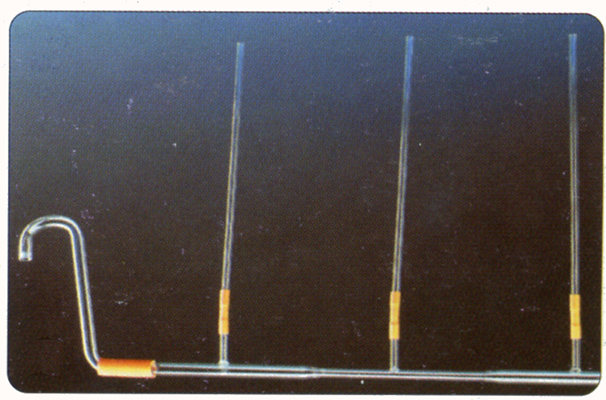 Physicists aim to understand, and sometimes to predict, physical interactions. They use two abstract concepts a lot: force and energy.

A force is something that can change an object's shape or how it is moving (or not moving). A force can have any size and acts in a particular direction. Forces are something to think about when analyzing things such as:

Energy is a numerical value that we calculate for an object, or a system, that quantifies the amount of change that has taken, or will take, place. What is important about this quantity is that, in every event or process, there is the same amount of it at the end as there was at the beginning. Energy does not explain why things happen, though we can use it to explain why some things do NOT happen.

In some situations, you can think in terms of either energy or force. For example, when trying to improve vehicle safety in the event of a crash, you could calculate the energy absorbed in the collision, or calculate the forces acting on the vehicle’s occupants.

Physicists are resourceful and will draw on whatever thinking tools help them understand a particular situation. They prefer to understand things quantitatively.