Something like a blade can oscillate on its own at a definite frequency. Here students investigate what happens when it is driven by an oscillating force at a rate which may or may not be the same as the natural blade frequency.

The following items should also be available, if required:

Assemble the oscillator as shown in the diagram. You may need to substitute Meccano parts and the hacksaw clamping device with something similar. 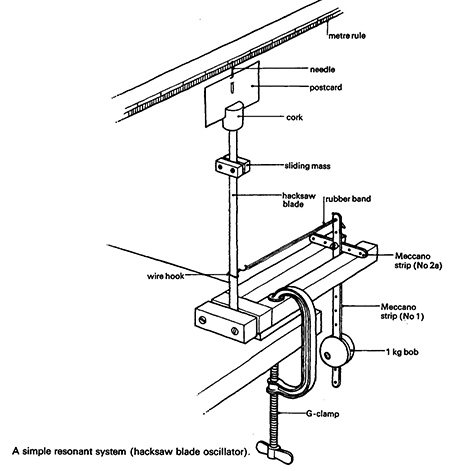 The amplitude of the motion of the driver pendulum can be maintained by gently tapping the pendulum strip a little below its support with one finger. 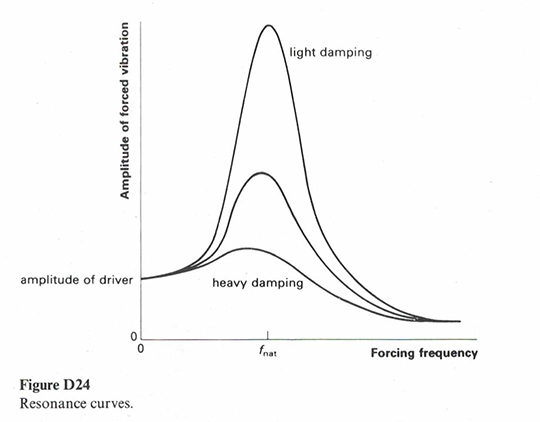 In this experiment the amplitude of forced vibrations is measured as the driving frequency varies. It could be used as part of a circus of experiments for students. 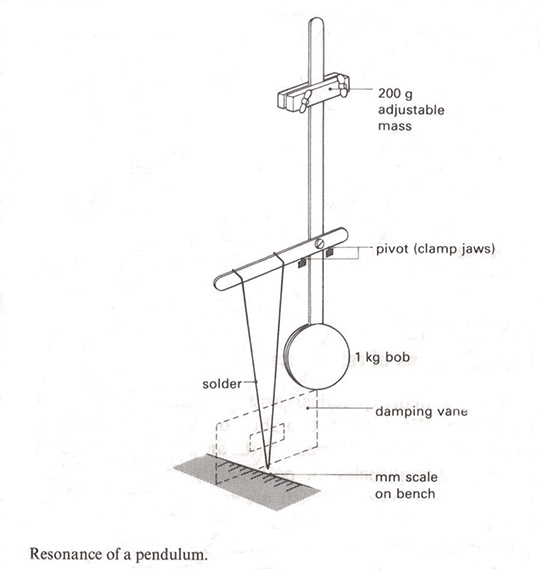 Set the apparatus up in advance. The two strips are lock-nutted together about 20 cm from the top of the vertical strip. The solder is bent as shown, so that it is supported by the horizontal strip but free to swing. (Coiled solder is easily bent onto the required shape.) The horizontal strip rests on the open jaws of a clamp, which acts as a pivot.

During each cycle of its oscillation the driver transfers some energy to the driven oscillator. Some of this energy may be returned to the driver later in the cycle (for example, a spring which has been forced to stretch can pull back, helping the driver return in its oscillation) but, at resonance, the phase difference p /2 prevents this. Some energy is dissipated in overcoming damping. The rest is stored in the forced oscillator, increasing its amplitude.

The amounts of energy lost to damping in each cycle increases with the amplitude of the oscillation. The final amplitude of oscillation is that for which the energy transferred by the driver in each cycle is equal to the energy used to overcome damping. With heavy damping this happens at small amplitude, and even the resonant oscillations are not violent. With light damping large amplitudes of the driven oscillator are achieved. A lot of energy transferred from the driver is then stored in the driven oscillator, particularly at resonance.

The quality factor, Q, of an oscillator can be formally defined like this:

However, there is a much more useful, though non-rigorous, description of Q: it is approximately equal to the number of free oscillations which occur before all the oscillator's energy is dissipated.

Some typical values of Q are:

Consider the guitar string, for example. The sound waves with a fundamental frequency of, say, 512 Hz (the C above middle C) transfer energy. If Q=1000, then roughly 1000 oscillations occur before all the energy is dissipated. Thus the plucked string will cease to oscillate after 1000/512 approx. 2 seconds: which agrees roughly with experience.

Resonance has wide ranging practical applications. Any machine or structure is likely to be subjected to periodic forces, either as a result of its own operation (e.g., the motor in any vehicle imposes an oscillation or vibration on every part of the vehicle) or through the action of some external agent (e.g., wind exerts a periodic force on buildings and structures through vortex shedding). If you keep your eyes and ears open you will notice countless examples of forced oscillations.

Forced oscillations can prevent machines operating efficiently, as when an unevenly loaded spin drier cannot achieve its normal working speed because much of its energy is being diverted into a violent wobbling. More seriously, forced oscillations can result in fatigue failure of metal components at stresses well below the tensile strength of the metal, simply as a result of repeated flexing (like breaking a piece of wire by bending it to and fro). If resonance occurs, forced oscillations can be violent and may have catastrophic results (as in the Tacoma Narrows bridge collapse). An understanding of forced oscillations is clearly essential to engineering.

Forced oscillations are not always destructive; sometimes engineers and scientists can make positive use of them. Nor is the phenomenon confined to mechanical oscillations. Microwave ovens heat food as a result of a forced oscillation of the molecules within the food, particularly water molecules, which are polar (they are permanently charged positive at one end and negative at the other, see figure D21). Infra-red absorption spectroscopy, which is an important technique for chemists, involves the forced oscillation of atoms or groups of atoms within a molecule. The conversion of radio waves to electric currents in an aerial is an example of a forced oscillation, and the operation of a tuning circuit in a radio relies on resonance.