knocking down a block

Knocking down a block

Making it hard or easy by choice of type of collision.

Whilst a simple analysis of the momentum of the projectile suggests that this is necessary, many students find this hard to accept, so it's worth showing this simple demonstration, so long as it's sufficiently well built up.

Arrange the chute so that the ball hits the standing block near the top, travelling horizontally.

Introduce the two balls as bouncy and not, by dropping them from the same height. Make a show of selecting the bouncy ball.

Explore the velocity that the bouncy ball needs to hit the chute at in order to knock over the block. Mark the release height on the chute. Now ask:

After a vote or extended discussion, or both, perform the experiment. Then build up to two diagrams of the momenta of the two balls before and after the collisions to help explain the effect.

This diagram could be useful

This demonstration connects the action of a lever with the conservation of momentum. The lever starts off balanced, with the vehicles stationary. You can exploit what students know about levers to explain that the vehicles must at all times be constrained in where they can be. So their masses fix their velocities.

Position the two equal-mass vehicles on the lever so that they balance. Ask where else you could position them so that balance is maintained. Repeat for several locations.

Point out that you need to exert a force to drive the situation from being in balance to being out of balance.

Then ask students to predict what will happen to the lever, and so to the positions of the vehicles, if the vehicles explode apart from the centre.

There are several arguments you could use here, and we'd recommend starting from recording that the centre of mass being stationary, and remaining stationary, as no resultant forces act on the whole edifice (vehicles and lever).

You could also start from considerations of symmetry, pointing out that there is a mirror line through the pivot.

Either of these approaches is ripe for extension to situations where the masses of the vehicles are not equal, or where the force between the two is attractive (use thin elastic cord) rather than repulsive.

We suggest that the focus is on the whole system – that is, both vehicles. This follows the approach in the Physics Narrative.

As a further extension you could ask what the whole would look like from another point of view: perhaps that of Alice, cruising past at constant velocity (perhaps with her web cam – you could do it for real).

Seeing a collision from a different point of view.

This demonstration brings to life the observation that physics ought to be consistent, no matter how fast you pass it by. That is, Charlie ought to agree with Bob and Alice, who are moving past at their own different velocities, about the underlying rules of the situation.

As a result it's bringing out the underlying rule of the conservation of momentum that ought to be the focus.

Perform a series of explosions and collisions with the track stationary. Rehearse the expected outcomes, using the kind of symmetry arguments presented in the Physics Narrative, and show that these do indeed happen.

Then mount the track, so that the same explosions and collisions can be performed with the whole apparatus trundling along. Ask if Alice, firmly seated on the original track, will notice any difference? What about Bob, seated on one of the vehicles, or even Charlie, seated in our laboratory? (As you seek to answer these questions, you may want to place plastic people at these locations, to keep in mind what the different points of view are.) Small video cameras at each location may help. It depends on how well you tell the story, the difficulties your students have in switching from one point of view to another, and the slickness within which you can operate the technology. Some prepared clips may also help.

You may also like to use the interactive on seeing collisions from different perspectives presented in the Physics Narrative.

This is a theoretical activity that provides a full framework for analysing interactions. It's worth doing a few times, so that the pattern becomes established.

The key to this activity is to go slowly enough, and to be explicit enough, that the process gets internalised.

Teacher: Here we're moving from a situation where things interact to a description where we have pairs of objects, each in its own environment.

Here are the steps:

Now you'll recognise that each object is ready for you to find the resultant force and apply Newton's second law.

But the process is very important, showing students how to use Newton's third law. That's the part where the forces appear in pairs: one on the object and one on the environment.

Giving in to gravity

Giving in to gravity

The idea to nurture here is that free-fall is a natural state. We experience forces only if we are prevented from going with the flow.

The floater in the image feels no force; it's anchored boats that experience a force. 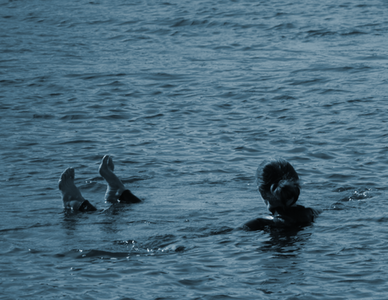 Use the groaner tubes to hear the difference when one part of a system is constrained and the other is allowed its natural motion.

Allow the students to find out, by gentle experimentation, the conditions under which the tubes make a noise, and not (when one part – the inside – is free to follow its natural motion, whilst the other – the outside – is not free to fall).

Make connections between this and free-fall, or weightless situations. Students will have found that there is no noise when the tubes are dropped or thrown, and that the noise depends only on one part being in free-fall and the other not. It doesn't matter whether the tube is on the way up or the way down.

Finally you might like to make the connection between this and Einstein's insight that gravity and free-fall acceleration are essentially the same thing – that is, gravity and space-time are connected. You experience weight only when you prevent natural motion.