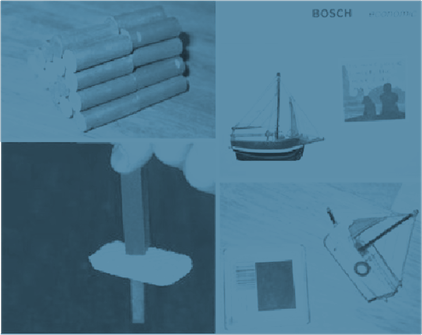 Stop for a moment and think of all of the places where magnets are used in your home. There are the magnetic catches on the kitchen cupboards; the magnetic strip to hold the kitchen knives; all of that stuff stuck on the fridge door; some of the children's games work by magnets; electric motors have magnets inside them and isn't there something about not putting computer discs too close to magnets?

In fact you don't need to look too far at all to find magnets in use, but how do they work? If you stop and think for a moment it's a little strange that the magnetic shape will stick at all to the fridge door. How does that work? Normally we need some kind of adhesive to make things stick, but this is not the case with magnets. How come the magnet will stick to the fridge door but not to the stainless steel kitchen sink (try it!)? Is it possible to make a magnet? Are there simple rules that allow us to predict that the magnet will stick to the fridge but not to the sink?

There are lots of questions to be asked about magnets and the pupils that we teach are often very keen to ask them! In this part of the narrative we shall provide the answers to these questions and to a few more that you may not even have considered!

Many people know that fridge magnets will stick to some surfaces but not to others. It depends on what material the surface is made from. At a simple level we can say that some materials are magnetic and some are not. 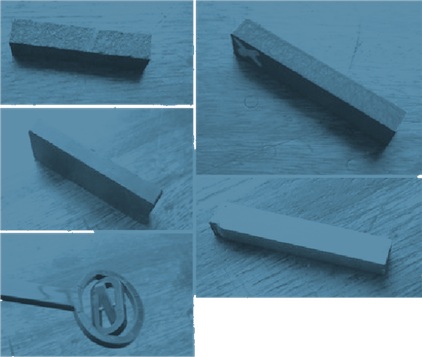 The everyday world of magnets is really all about those magnetic materials that can be magnetised to make permanent magnets. These are the magnets that stick on the fridge door and are used for door catches and all are made from steel with a high iron content. The steel is magnetic because the iron it contains is magnetic.

Permanent magnets can be contrasted with those materials which are attracted to magnets (and are therefore magnetic) but do not themselves retain any magnetism when the magnet is removed. These are temporary magnets.

In the rest of this episode, when we refer to a magnet, we really mean a permanent magnet.

The poles of a magnet

The poles of a magnet

Supposing you take a bar magnet and suspend it freely at its mid-point on a length of thread. Once the magnet stops spinning it takes up a position such that one end points roughly towards the Earth's North Pole and the other towards the South Pole. Set the magnet spinning again and allow it to settle down. The same outcome results, the magnet (and any other magnet) aligns itself along the north–south direction.

Good use of this property of magnets is made in compasses, where the compass needle is simply a freely suspended bar magnet. If you are caught out on the moors when a mist descends, it is still possible to find your way by using a compass which always points along the north–south line.

All magnets have two poles

Do all magnets have two poles? Look at these examples, which cover those you are most likely to come across.

So in the lab you'll never get just one pole. But the universe is a much larger place – what about there?

Cutting a magnet in half

Karen: But what happens if you cut a magnet in half? Do you get a north pole and a south pole?

Well you know that is not the case. If the physics lab bar magnet is cut in half then there will be two magnets, each with a north and a south pole. But then there is the next question:

Karim: What happens if you cut it in half loads of times so you are left with just one atom?

The answer is that the atom will still behave as a magnet with a north and a south pole. Although it is possible to know this answer the fundamental question that the pupil is asking is a very good one: why can't you get a north pole or south pole on its own? This seems all the more strange since positive and negative charge don't always accompany one another. This difference between electric and magnetic fields is one of the oldest puzzles in physics. Why is it possible to isolate positive and negative electrically charged particles, but not north and south magnetic poles?

In fact finding magnetic poles on their own, or magnetic monopoles, is an idea that was suggested first in 1931 by physicist Paul Dirac. The idea has also been put forward in some modern theories that try to connect all the forces together (grand unified theories). However so far all experimental searches for these elusive particles have proved fruitless.

So, if the question of monopoles is bothering pupils in class you can assure them it bothers physicists too.

The behaviour of bar magnets

Take a simple bar magnet – the sort that is found in physics lessons – in the form of a rectangular block of steel. Bring another simple bar magnet towards it. The two magnets will either attract or repel each other. Turn one of the magnets around. If they repelled each other before, now they will attract.

It is clear that the two ends, or poles, of the magnets behave differently and there is a simple rule to describe their interaction:

It is important to realise that here we are doing no more than saying what happens and making a simple rule. This is not an explanation of why there is attraction or repulsion. That explanation lies in the two magnets moving to reduce the energy stored between them but that is not a concern of the 11–14 curriculum!

A model of magnets

A model of magnets

Imagine two bars of iron placed side-by-side on a table. One of them is a bar magnet, the other is not. From the outside it is impossible to tell which is which, just by looking. How might we imagine the difference between the two (which seem to be identical bars of iron) by thinking about their internal structure?

Inside any magnetic material, such as iron, we can imagine each atom or molecule to be a very small magnet or mini-magnet. So a magnet is made of lots of smaller magnets. You can do this on the bench top, by putting magnets together:

In your imagination, you can extend this to very many mini-magnets, taking the large magnet apart and putting it together again.

When the material is not magnetised, we can imagine that there is no pattern to the lay-out of the mini-magnets. In other words they point in all directions.

When the material is magnetised, the mini-magnets become aligned so that they all point in the same direction and the object becomes a magnet.

The mini-magnets a way of thinking about what is happening during magnetisation. We'd suggest encouraging children to 'think about it like this!' Science is full of such models which allow us to imagine what is happening, both to help us get a feeling for what is going on and to help us develop expectations.