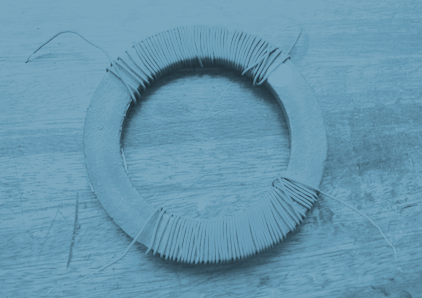 What do electric bells, scrap-yard cranes and the central-locking in cars have in common? They all work using magnets, but not the permanent magnets of door catches and children's toys. The bells, cranes and car locks are based on electromagnets.

What is an electromagnet?

The connection between electric currents and magnetic fields was first demonstrated in 1820 by a Danish scientist named Hans Christian Oersted. Oersted showed that a compass needle (a small pivoted magnet) moves whenever an electric current passes through a nearby wire.

This simple demonstration can be replicated in the classroom to great effect, making the link from electricity to magnetism:

An early view of the connection between electric currents and magnetism

In fact, the field around the wire is circular in shape; the needles of the plotting compasses form a continuous loop around the wire. These circles stretch out along the wire, forming cylinders.

If an electric current is passed through a long coil of wire (a solenoid) a magnetic field is produced which is the same shape as that of a bar magnet.

How is it that the bar magnet field shape is produced around the solenoid?

We can answer this question by starting from what we already know, first remembering the field around the long straight wire and now imagining the wire is coiled up. Adding the field due to all of the coils of wire amounts to a field shape exactly the same as that of a bar magnet.

This level of detail in thinking about magnetic fields is not part of the 11–14 curriculum, but it is helpful to have these more advanced ideas in mind when teaching the principles of magnetic fields. 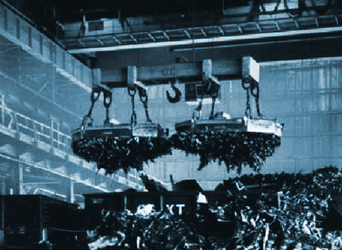 Why might we want to use an electromagnet rather than a permanent bar magnet? There are two obvious advantages to using electromagnets.

Firstly they can be switched on and off. Complete an electric circuit and a current passes to produce a magnetic field. Switch off the current and the magnetism disappears (provided the iron forms a temporary magnet).

Also, their magnetic strength can be changed. The strength of the magnetic field around the solenoid can be increased by:

Car scrap-yards use huge electromagnets to lift heaps of crumpled iron and steel. Switch off the current and the object crashes to the ground.

In the home, by far the most common use of electromagnets is in electric motors. Think of all of those bits of electrical equipment with some kind of electric motor: vacuum cleaners, refrigerators, washing machines, tumble driers, food blenders, fan ovens, microwaves, dish-washers, hair driers.

The list is a long one, and when you start thinking more widely about electric motors in cars, lawn-mowers and a whole host of industrial applications, it becomes obvious that this application of electromagnets is extensive and extremely important to our daily lives. The question of how electric motors work builds on the basics of magnetism introduced here, and is usually worked on in later years.

The motor is more complex than either, but included here for completeness.

Electromagnets and what can be done with them