Students will have a simple idea of electromagnetic radiation – that there are several types of radiation, similar to light, all of which travel at the same speed in empty space.

These episodes develop this picture. In particular, we start from the assertion that light is a transverse wave. How can we know? To explain this, we need to explore the idea of polarisation. 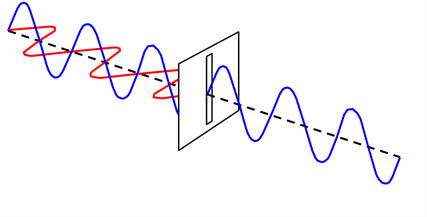 Students should know the main sub-divisions of the electromagnetic spectrum.

They should also have studied some basic ideas about waves (how they are produced; reflection and refraction).

They should know the difference between transverse and longitudinal waves.

If students study these episodes before they have dealt with radioactivity, it will help them to understand the nature of gamma radiation, as well as the idea that the intensity of radiation diminishes as it spreads out.

Students will learn much more about light when they study diffraction and interference.

This episode requires students to develop their idea of electromagnetic radiation. Since they cannot see either the wave nature of light or the molecular structure of Polaroid, they will have to take some of this on trust. You can establish the basic ideas using analogies. The approach is non-mathematical.

Provide each student with two Polaroid filters. Ask them to look through them at light sources (a lamp, the sky, (particularly at 90  °  to the Sun), etc.). Try one filter, then two. Rotate one relative to the other.

(It is helpful if the filters are rectangular rather than square, or marked in some way to help students keep track of the orientation.)

They should notice that one filter reduces the intensity of the light. A second can cut it out completely, if correctly oriented.

Discussion: A simple explanation of polarisation

Check that your students can recall the difference between transverse and longitudinal waves.

Point out that most wave properties are shared by both transverse and longitudinal waves, but there is one that distinguishes between the two – polarisation. Because this can only happen with transverse waves, it has given us useful information about the nature of waves.

(Note that it is better to talk about plane-polarised waves, rather than simply polarised, as this will save confusion later.)

You will have to state that light (and other electromagnetic radiations) consists of oscillating electric and magnetic fields. Polaroid is a type of plastic; its molecules are long chains, oriented parallel to one another. There are electrons that are free to run up and down the chains

Here you can show that light, microwaves and radio waves can all be polarised.

Demonstration: Polarisation of light by scattering

When light passes through a cloudy liquid, some is scattered. The scattered light is polarised.

Set this up in advance; show it briefly, and invite students to look at the transmitted and scattered light through polarising filters during the rest of the episode. 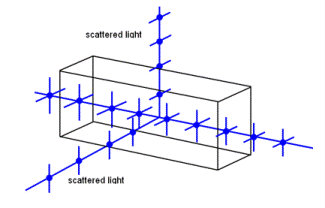 Use this diagram to help explain why scattered light is polarised.

It will help students if you explain that the length of an aerial is often one-quarter or one-half wavelength.

Make a selection of questions that you feel are relevant to your students.

Summarise the ideas that you have been looking at: we know that electromagnetic waves are transverse because they can be polarised. Sound cannot be polarised, and so must be longitudinal. Emphasise that polarisation is good evidence for the wave nature of light; reflection and refraction can both be explained without recourse to the idea of waves. Later, students will see that interference and diffraction are both also characteristic of waves rather than particles.

This could be a home experiment. It will not be possible for everyone to see every type of aerial but observations could be pooled and discussed. 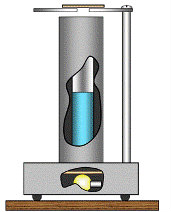 Polarimeters and the rotating effect of sugar; used in the sweet industry.

This could form the basis of an investigation.

This episode extends students’ understanding of the nature of different types of electromagnetic radiation, and considers their shared nature.

Demonstration: Beyond the visible spectrum

Set up a spectrum of visible light. To do this, shine a bright white light source through either a prism or a diffraction grating.

Display the spectrum on a white screen.

(Be sure to check that these methods work before showing this to a class.)

In advance of this episode, ask students to find out about a particular region of the electromagnetic spectrum. They should find out about:

An alternative approach would be to ask individuals to research the importance of different types of electromagnetic radiation in different spheres of interest – medicine, astronomy, communications, the historical development of physics, etc.

Ask students to present their findings in turn; provide a suitable blank table for them to record a summary.

This can be used as an OHT to show how the radio wave and microwave regions can be subdivided.

These questions will help to focus students’ attention on the general features of the spectrum.

This episode considers the ways in which the intensity of radiation decreases with distance from the source.

Discussion and demonstrations: Radiation spreading out and an analogy

Show that the intensity of each type of radiation decreases with distance from the source.

(If students have already studied radioactivity, they may be aware of the inverse square law for gamma radiation.)

Why does the intensity decrease with distance? Try to give two general reasons. (Absorption and spreading out.)

Radiation spreading out radially covers a bigger and bigger area, proportional to r2, so its intensity decreases as 1r2. It can help to think of a toast-buttering gun. The gun can butter a single slice of toast at a distance of 1 m. How can it butter four slices simultaneously? (Place them in a 2  ×  2 array at a distance of 2 m.) How thick will the butter be? (14 of original thickness.) Extend this to a 3  ×  3 array at 3 m, and so on.

Point out that the intensity of radiation can be measured in watts per square metre (W m-2).

Answer: If the intensity has gone down by a factor of 4, the distance away must have doubled to 2.0 m.

Student experiment: Estimating the power output of the sun

Students can make measurements to estimate the power output of the sun, making use of the inverse square law. Note that there is a good opportunity here to discuss the validity of the answer obtained.