The approach to electrolysis in these experiments demonstrates that some solutions conduct current. They do not explore in detail chemistry in the solution or at the electrodes.

If students have already passed an electric current through solid materials, they can now test the conductivity of liquids and solutions.

Modern dry cell construction uses a steel can connected to the positive (raised) contact. The negative connection is the centre of the base with an annular ring of insulator between it and the can. Some cell holders have clips which can bridge the insulator causing a short circuit. This discharges the cell rapidly and can make it explode. The risk is reduced by using low power, zinc chloride cells not high power, alkaline manganese ones.

Children have been known to taste copper sulfate crystals. A supply of drinking water should be to hand to wash a mouth if this is deemed a possibility.

The carbon rods can be pencil leads. 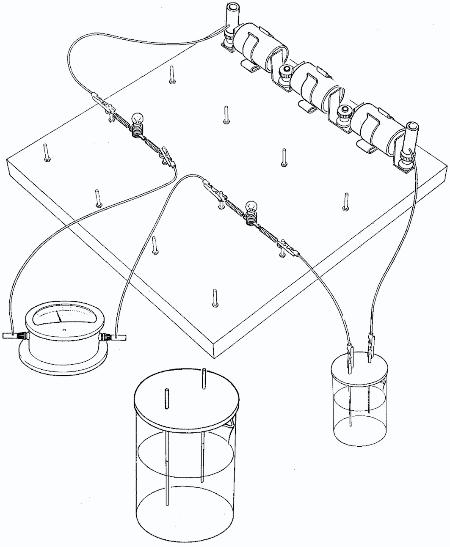 An opportunity to investigate the deposition of solids and gases at the electrodes immersed in a solution.

Modern dry cell construction uses a steel can connected to the positive (raised) contact. The negative connection is the centre of the base with an annular ring of insulator between it and the can. Some cell holders have clips which can bridge the insulator causing a short circuit. This discharges the cell rapidly and can make it explode. The risk is reduced by using low power, zinc chloride cells not high power, alkaline manganese ones.

The carbon rods can be pencil ‘leads’.

The strips of copper foil should be 2 cm longer than the depth of the beaker. 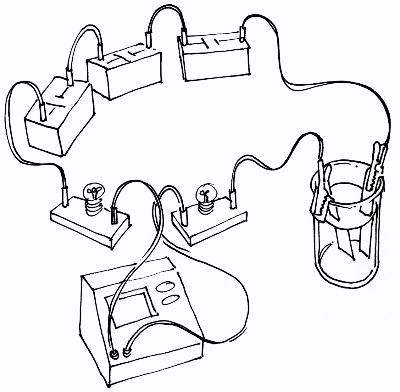 A useful application of electrolysis.

The strip of copper foil should be 2 cm longer than the depth of the beaker.

A delightful demonstration of electrolysis.

Lead salts are toxic and must be handled with care. Hands must be washed thoroughly after handling them and their solutions. 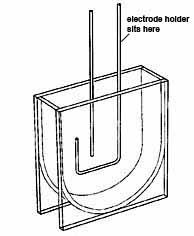 The cell should have flat sides. It should be of glass or Perspex.

If you use a projection system, it should be an old optical projector or flexcam and display screen.

A suitable strength is 30 g of lead acetate to 100 g of water. Should difficulty be experienced in dissolving the lead acetate, add a few drops of glacial acetic acid.

The production of hydrogen and oxygen from water.

Keep flames at least 1 m from the voltameter. Keep students 4 m from exploding bubbles, which are ignited with a splint taped to a meter rule.

A voltameter improvised from two burettes (as illustrated) is perfectly adequate for this demonstration.

Alternatively, a Hoffman voltameter could be used but the gas pressure may be too low to blow bubbles. 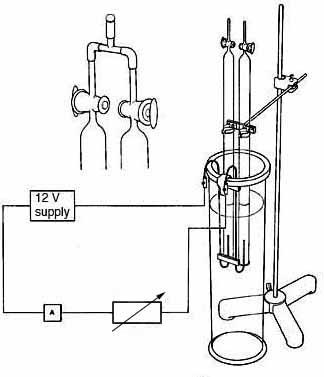 A magic stylus for colourful writing.

The stylus is made from a 15 cm length of 1 cm dowel with two 0.5 cm screw-eyes screwed into one end. A 75 cm length of 26 SWG insulated copper wire is secured to each screw-eye and taped to the dowel with Sellotape or rubber bands. (The copper wire must make good electrical contact with the screw-eye.)

Phenolphthalein indicator: Weigh out 0.1 g of solid and dissolve 60 ml industrial methylated spirit; pour into a measuring cylinder and make up to 100 ml with water. Add 0.5 ml to 100 ml of potassium sulfate solution.

Electrical phenomena result from a fundamental property of matter: electric charge. The atoms that constitute most matter we encounter contain charged particles. Protons and electrons each have one unit charge, but of opposite sign. Atoms are generally neutral because the number of electrons and protons are the same.

Electric charges at rest have been known much longer than electric currents.

The property now called static electricity was known to the philosophers of ancient Greece. In fact the word electricity comes from ‘elektron’, the Greek name for amber. Amber is a resinous mineral used to make jewellery. It is probable that small fibres of clothing clung to amber jewels and were quite difficult to remove. Trying to rub the fibres off made the situation worse, causing early philosophers to wonder why.

William Gilbert mentioned the amber effect in his ground-breaking book On Magnetism, published in 1600. He noticed that the attraction between electrics was much weaker than magnetism and wrongly said that electrics never repelled.

A giant leap of understanding was required to explain observations like these in terms of positive and negative electrical charge. In the 18th century, Benjamin Franklin in America tried experiments with charges. It was Franklin who named the two kinds of electricity ‘positive’ and ‘negative’. He even collected electric charges from thunderstorm clouds through wet string from a kite.

Franklin was an advocate of a ‘single fluid’ model of electric charge. An object with an excess of fluid would have one charge; an object with a deficit of fluid would have the opposite charge. Other scientists had advocated a ‘two fluid’ theory, with separate positive and negative fluids moving around. It took over a century for the debate to come down on Franklin’s side.

It is interesting to note that Franklin coined several electrical terms which we still use today: battery, charge, conductor, plus, minus, positively, negatively, condenser (= capacitor), among others.

Electric currents were not fully investigated until batteries were invented in about 1800. Passing currents through salt solutions provides evidence that there are two kinds of charge carriers, positive and negative. The charge carriers that boil out of white hot metals are negative electrons, and movements of electrons produce current in a cool, metal wire.

Electric forces are what hold together atoms and molecules, solids and liquids. In collisions between objects, electric forces push things apart.