Things you'll need to decide on as you plan

Things you'll need to decide on as you plan: Electrical Working in Loops

Bringing together two sets of constraints

Focusing on the learners:

Teacher Tip: These are all related to findings about children's ideas from research. The teaching activities will provide some suggestions. So will colleagues, near and far.

Focusing on the physics:

Teacher Tip: Connecting what is experienced with what is written and drawn is essential to making sense of the connections between the theoretical world of physics and the lived-in world of the children. Don't forget to exemplify this action.

This episode takes us beyond ideas of charge and current by focusing on energy in simple electrical loops, with a special focus on the rate at which energy is shifted.

We extend the stores and pathways approach developed in the SPT: Energy topic as we know this provides a consistent framework for qualitative and semi-quantitative descriptions.

Existing approaches to teaching about energy typically involve lots of different kinds of energy: heat energy, electrical energy, light energy, sound energy and so on. This is rather different from the approach taken in the SPT: Energy topic, where energy is looked for in different kinds of stores: chemical stores, thermal stores, kinetic stores and so on. Here we think carefully about what is happening in simple electrical loops in terms of this approach to thinking about energy.

Is it helpful to talk about electrical energy?

Is it helpful to talk about electrical energy?

Electrical energy is an unhelpful phrase

Right Lines: When the bulb is lit in the circuit, energy is shifted from the chemical store associated with the cell to the thermal store of the surroundings.

How to be more helpful

There are significant differences between these two ways of talking and thinking about simple electrical loops:

While the electrical circuit is clearly not a store of energy, it does provide the pathway along which energy is shifted by cell and bulb.

We are clear that the right lines approach makes much more sense than the existing schemes, which refer to different kinds of energy including electrical energy and light energy. At the same time we recognise that changing to this approach involves the big challenge of changing familiar routines for both students and teachers.

The story of the circuit loop that we're moving towards is based on chemical and thermal stores and two linked pathways (electrical and heating), which operate simultaneously:

When the circuit loop is complete, a current circulates and the bulb glows.

Electrical working occurs as charge passes through the resistance of the bulb, and energy is shifted with the chemical store being depleted and the thermal store associated with the bulb being filled.

The glowing bulb heats the surroundings through thermal conduction, convection and radiation.

The glowing bulb shifts energy to the surroundings along two pathways: heating by particles (through conduction and convection) and heating by radiation (both through emitted light and non-visible radiations).

How come the bulb lights straight away?

How come the bulb lights straight away?

Revisiting the idea of remote working – it's nearly instantaneous

Right Lines: No! When the circuit is completed the bulb lights immediately because the current is (almost) immediately the same in all parts of the circuit. 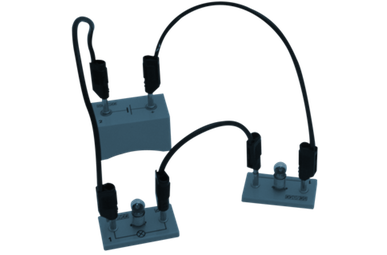 Neither of these ideas is correct. The charge that constitutes the current is already present in all parts of the circuit and, as soon as the circuit is completed, the charged particles start flowing and energy is shifted by the bulb.

The teaching challenge here is to emphasise the immediate-all-at-once nature of the charge flow in an electric circuit. Without doubt this is best addressed with the rope loop analogy. In fact, if you think that your students might have lingering problems in this area, it would be worth going back to the big circuit and rope loop combination of activities first introduced in the SPT: Electric circuits topic.

Set up the big circuit in the lab and invite students to predict whether or not the bulb will light straight away when the circuit is completed. The bulb lights immediately. Now invite the students to use the rope loop analogy to explain why this is the case.

As one 13-year-old girl explained:

Jill: It's obvious! As soon as the battery starts the rope moving, the bulb heats up as the rope passes through. There's no delay because the rope all starts moving together.

Energy in stores; power in pathways

Energy in stores; power in pathways

Keeping the lived-in world and imagined world separate but connected

Drawing on the previous sections, we have seen that it's possible to develop an energy description of electric circuits at a number of different levels. For example, suppose we have a simple circuit loop consisting of a 12 volt supply and a bulb in which there is a current of 2 ampere (maybe a car headlamp bulb). It's possible to describe the loop in a number of different ways:

A fundamental feature of any pathway is that it's possible to calculate the rate at which energy is shifted. This is the power in the pathway. In the case of the electrical pathway in this example, it's helpful for students to go back to first principles in thinking through the rate of shifting of energy along the pathway: this is the operating power of the pathway.

Teacher Tip: So: with the 12 volt cell, the potential difference across the bulb is 12 volt. This means that 12 joule of energy is shifted for each coulomb of charge passing through the resistance of the bulb. With a current of 2 ampere, 2 coulomb pass through the bulb each second.

Adding a resistor in series... and shifting energy

Resistance in a Series Circuit
Electricity and Magnetism

Adding a resistor in series... and shifting energy

Reducing the power in the pathway: from one to two bulbs in series

Wrong Track: When the resistor is added in series, there is more resistance so energy will be shifted from the cell more quickly.

Right Lines: When the resistor is added in series, the extra resistance reduces the current and energy is shifted from the cell at a lower rate.

Using quantitative examples to help keep the thinking on track

This is the kind of question where using physical quantities (numbers and units) offers a direct way to sort out an answer. So, you might invent some figures along the following lines:

Teacher: Suppose we say that the cell is a 6 volt supply and that the resistor has a resistance of 12 ohm.

Teacher: So, 6 joule for each coulomb, 0.5 coulomb arriving each second, this means that 3 joule of energy is shifted by the resistor each second.

Teacher: OK, what happens when we add a second resistor in series?

Teacher: The total resistance is now 24 ohm and 3 volt is the potential difference across each resistor.

Teacher: The current in the loop is 6 volt across 24 ohm, so 0.25 ampere. This makes sense, because doubling the resistance halves the current.

Teacher: So, adding an equal resistor in series halves the rate at which the chemical store of the cell is depleted of energy.

The physical picture to leave the students with is one of the circulation of charge being reduced and therefore the rate of shifting energy being reduced. It's also worth emphasising that the rate of shifting energy at each resistor is reduced by a factor of 4 (from 3 joule inverse second to 0.75 joule inverse second) when the resistance of the loop is doubled since both the current through the resistor and the potential difference across the resistor are halved.

Wrong Track: When the resistor is added in parallel, there is more resistance, so energy will be shifted from the cell more slowly.

Right Lines: When the resistor is added in parallel, an extra current loop is provided and energy is shifted from the cell at a greater rate.

Using quantitative examples to help keep the thinking on track

As with the previous challenge, using physical quantities offers a direct way to sort out an answer. So, you might invent some figures along the following lines:

Teacher: Suppose we say that the cell is a 6 volt supply and that the resistor has a resistance of 12 ohm.

Teacher: So, 6 joule for each coulomb, 0.5 coulomb arriving each second, this predicts that 3 joule of energy is shifted in the resistor each second

Teacher: OK, what happens when we add a second resistor in parallel?

Teacher: 6 volt is the potential difference across each resistor.

Teacher: Nothing has changed from the original circuit. The current through each resistor is:I = VR, in this case 6 volt12 ohm, so the current works out at 0.5 A.

As a result, 3 joule of energy is shifted in each resistor per second.

Teacher: So, adding an equal resistor in parallel doubles the rate at which the cell's store of energy is depleted.

The physical picture to leave the students with is one of there being a circulation of charge through each of the two parallel loops. The flow of charge through the cell is doubled and therefore the rate at which energy is shifted is increased.

Thinking about actions to take

Thinking about actions to take: Electrical Working in Loops

There's a good chance you could improve your teaching if you were to:

Teacher Tip: Work through the Physics Narrative to find these lines of thinking worked out and then look in the Teaching Approaches for some examples of activities.

Teacher Tip: These difficulties are distilled from: the research findings; the practice of well-connected teachers with expertise; issues intrinsic to representing the physics well.