Just as the effects of magnets and of gravity can be explained in terms of fields, the way that electric charges and circuits behave can too. Force fields provide an alternative explanation to action-at-a-distance between charged articles.

Comparisons with magnetic fields may be helpful here.

Paint the polystyrene balls with Aquadag or other conducting paint, or spray them with antistatic spray to give them a conducting surface. (Metal balls are equally good, but they should be large: diameter at least 5 cm.) Support each on a horizontal insulating rod (e.g. Perspex). Tape a small piece of aluminium foil onto each ball, to serve as an electrode. Use crocodile clips to attach leads to the supply.

Make a small paper vane, like a compass needle, about 4 cm long. Attach it to a long Perspex rod with a pin as pivot. The paper must be slightly conducting; paper is hygroscopic enough to ensure conduction in most cases. If necessary, breathe on the paper. 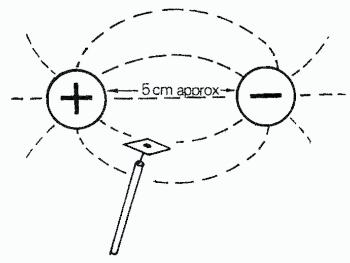 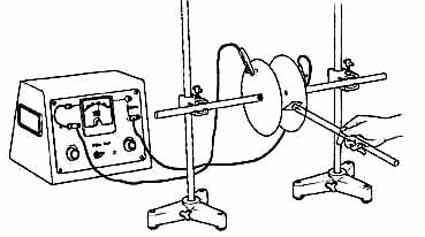 This experiment was safety-tested in December 2006

A shuttling ping-pong ball serves as a model of ions moving in an electric field.

Although educational EHT supplies are limited to safe output currents, the shock obtained by touching the live plate in this demonstration can make the demonstrator jump. Switch the supply off before making adjustments.

A model of Millikan’s experiment

A model of Millikan’s experiment

A qualitative experiment to show the principle of a force on a charged body between two parallel plates.

Use an EHT supply of no more than 5 kV, which is current-limited to less than 5 mA.. The power supply for the heater MUST have adequate insulation. Leads used MUST have shrouded connectors and insulation capable of withstanding 5 kV.

Make all connections with the power supply turned off. Do not adjust connections while the EHT is switched on.

Electron beam tubes are fragile. Because they are evacuated, they will implode if they break. The tubes are also expensive, so handle them with great care. Use the purpose-designed holders during practical work.

Note that when switching the EHT supply off, it can take a little while for the voltage output from the EHT to fall to zero. Allow sufficient time before disconnecting.

Be Careful not to touch the exposed plates.

The illustrations show the ‘macro-Millikan’ apparatus. It consists of a pair of metal plates, one of which has a central hole through which a small polystyrene ball can pass. The ball has a length of nylon thread attached, and at the other end of the thread is a Pyrex glass spring.

The best arrangement for securing the upper end of the spring is to attach it to another loop in a nylon thread. This is taken up over a pulley connected to the ceiling, and then to an eyelet on a block of wood. Alternatively, a support from a long retort stand rod can be used, as shown below, and brought up over the plates, forming a hooked support.

This experiment was safety-tested in March 2008

Electrical phenomena result from a fundamental property of matter: electric charge. The atoms that constitute most matter we encounter contain charged particles. Protons and electrons each have one unit charge, but of opposite sign. Atoms are generally neutral because the number of electrons and protons are the same.

Electric charges at rest have been known much longer than electric currents.

The property now called static electricity was known to the philosophers of ancient Greece. In fact the word electricity comes from ‘elektron’, the Greek name for amber. Amber is a resinous mineral used to make jewellery. It is probable that small fibres of clothing clung to amber jewels and were quite difficult to remove. Trying to rub the fibres off made the situation worse, causing early philosophers to wonder why.

William Gilbert mentioned the amber effect in his ground-breaking book On Magnetism, published in 1600. He noticed that the attraction between electrics was much weaker than magnetism and wrongly said that electrics never repelled.

A giant leap of understanding was required to explain observations like these in terms of positive and negative electrical charge. In the 18th century, Benjamin Franklin in America tried experiments with charges. It was Franklin who named the two kinds of electricity ‘positive’ and ‘negative’. He even collected electric charges from thunderstorm clouds through wet string from a kite.

Franklin was an advocate of a ‘single fluid’ model of electric charge. An object with an excess of fluid would have one charge; an object with a deficit of fluid would have the opposite charge. Other scientists had advocated a ‘two fluid’ theory, with separate positive and negative fluids moving around. It took over a century for the debate to come down on Franklin’s side.

It is interesting to note that Franklin coined several electrical terms which we still use today: battery, charge, conductor, plus, minus, positively, negatively, condenser (= capacitor), among others.

Electric currents were not fully investigated until batteries were invented in about 1800. Passing currents through salt solutions provides evidence that there are two kinds of charge carriers, positive and negative. The charge carriers that boil out of white hot metals are negative electrons, and movements of electrons produce current in a cool, metal wire.

Electric forces are what hold together atoms and molecules, solids and liquids. In collisions between objects, electric forces push things apart.

There are some experiments which must be done in semi-darkness, for example, optics experiments and ripple tanks. You need to plan carefully for such lessons. Ensure that students are clear about what they need to do during such activities and they are not given unnecessary time. Keep an eye on what is going on in the class, and act quickly to dampen down any inappropriate behaviour before it gets out of hand.

Shadows on the ceiling will reveal movements that are not in your direct line of sight.