Modern astronomy emerged from its Greek roots when Copernicus put forward a simpler model of the solar system to account for planets' apparent motion.

Copernicus explains the motion of planets

Copernicus explains the motion of planets

A simple model to show how Copernicus explained the looped paths of the outer planets.

Be careful not to hit lights, ceiling panels, and so on. 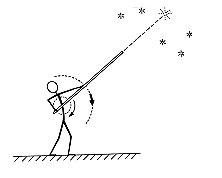 Copernicus did not only offer an alternative model that looked simpler than the heliocentric model. He also extracted new information from his heliocentric scheme: the order and relative sizes of the planetary orbits.

Estimating the size of the planets themselves would have to wait until telescopes had been invented. A rough model of the solar system known to Copernicus would then be:

Download modern data to make a chart of the planets known to Copernicus.