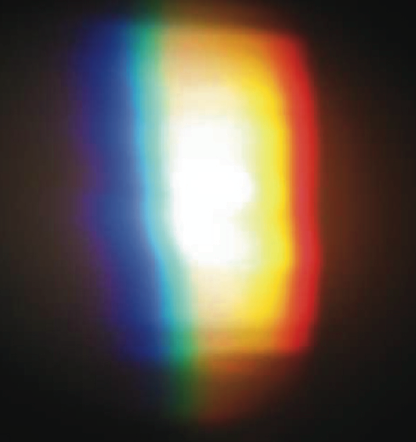 In 1666 Sir Isaac Newton studied the effect of passing a beam of light through a triangular glass prism. He completely darkened his study and made a small hole in the window shutters to let in a fine beam of sunlight. He then held a glass prism in the beam and noticed that a brilliant spectrum of colours, from red to violet, formed on the wall at the other side of the room. In his own words (taken from a letter to the Royal Society): It was at first a very pleasing divertissement, to view the vivid and intense colours produced thereby.

Newton concluded from this simple experiment that the light from the Sun, or white light, as he referred to it, is made up from a whole spectrum of different colours. How can we explain the production of the spectrum?

The red light is refracted least.

The violet light is refracted most.

With a rectangular glass block, the light beam is refracted first one way and then back in the opposite direction, so that the emerging beam is parallel to the incident beam. With the triangular block, the geometry of the prism is such that there is some separation of the different colours of light at the first face and then further separation at the second.

As a result the red light lands at a different point on the screen to the violet light and in between we can see the full spectrum of colours. The white light is dispersed into its constituent colours and the process is therefore referred to as dispersion.

In Newton's own words: The light tending towards one end of the Image, did suffer a Refraction considerably greater then the light tending to the other. And so the true cause of … that image was detected to be no other, than that Light consists of Rays differently refrangible, which, without any respect to a difference in their incidence, were, according to their degrees of refrangibility, transmitted towards divers parts of the wall.

Returning to the concept of frequency introduced in episode 01, we can say generally that higher frequencies of light are refracted more than lower frequencies. But that's still only a rule of thumb, not something that could really be an explanation. If you want more, you'll have to delve deeper: there is more in the SPT: Radiations and radiating topic.

Newton identified seven colours in the spectrum on his study wall:

In truth, a different number of colours might have been suggested (e.g. many people would not identify indigo as a separate colour), but at that time it was believed that the number seven had a mystical significance. Newton therefore proposed these seven colours.

Believing that white light was made up from the seven colours, Newton planned a crucial experiment to test his theory of differential refraction. This was very important because the accepted theory of the day suggested that the prism acted on any incident light to change its colour (to add colour), rather than that it involved a process of separation of colours by refraction. In this experiment he used two prisms.

When any one sort of Rays hath been well parted from those of other kinds, it hath afterwards obstinately retained its colour, not with standing my utmost endeavours to change it.

This finding provided evidence to counter the argument that the prism acts on the ray of light to change its colour. The finding supported Newton's view that sunlight, or white light, is made up from light of different colours, and that the prism acts to disperse those colours by refraction.

The transmitted light is red in colour and less bright, as the other colours are absorbed by the filter. Some light is removed from the incident beam.

Filters isolate individual colours by removing the other colours, so this process is often referred to as colour separation by subtraction. That's not a good name, as its a constant fraction of the beam of other colours that is removed by the colour-specific absorber (so the process is better modelled by multiplication by a number less than 1, rather than subtraction). In practice colour filters are not pure, that is they will allow through a small range of colours. The better the filter the smaller the range.

Filters that select a small range of frequencies are quite rare. Much more common are filters that rely on how the eye sees colour. These allow a number of frequencies through, but humans cannot tell the difference. Again each filter removes a constant fration of each colour in the beam; there is more detail in the SPT: Radiations and radiating topic.

How we see colour

How we see colour

How our eyes register colour

To keep what we record as red separate we call this perceptual red. The frequencies falling on the eye when we say yes, that's red may not be only from a narrow part of the spectrum. A large number of combinations of frequencies can be recorded as red by the average eye. How does this come about?

It turns out that the eye has only 3 colour detectors. Stimulating these three to different degrees produces the full range of sensations of colour. Maxwell spent a good few years spinning disks with sectors of varying size and of varying hue in front of a wide range of eyes to prove just this point.

These days the television, in almost every home, gives everyday evidence that mixtures of three colours are enough to reproduce the whole range of colour sensation in us. Inspect one with a magnifying glass, or just sneeze on the computer monitor as you work, and you'll see small spots of red, green and blue. From these are synthesised the full range of visual sensations enjoyed during a broadcast.

If red, green and blue beams are directed onto a white screen, then where all three beams overlap a white patch is produced.

You cannot tell the difference between an appropriate mixture of these three beams and a spectral colour. So you can have an experience identical to that caused by any of the colours of the visible spectrum by mixing together combinations of red, green and blue light. For this reason, red, green and blue are referred to as the primary colours. The three colours produced by mixing two primary colours are called secondary colours.

Colour depends on the light source and the object

Why does a red dress appear red in ordinary white light?

It is the red pigment or dye in the dress which controls this process of selective absorption and reflection.

You may have had the experience, whilst shopping, of being advised to look at some item of clothing outside in the daylight to see what it really looks like. This reminds us that the colour of an object not only depends on the colouring pigments, but also on the ambient light in which it is being viewed.

You might use red, green or blue torches to illuminate the vase:

We usually assume that the normal colour of an object is how it appears in white light. If the ambient light is not white the object will appear a different colour.

Puzzled: Why is there a difference?

In mixing yellow and blue light, you need to remember that yellow can be produced as a secondary colour, containing the primary colours red and green. Adding blue to yellow therefore gives:

What happens when you mix paint 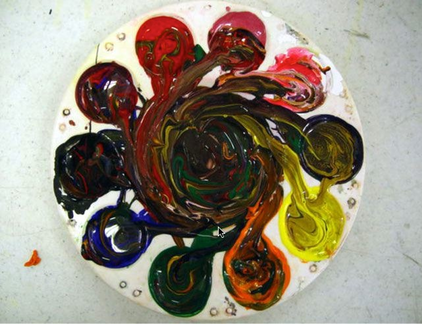 Explanations for the colours when you mix paint

The blue paint absorbs a range of frequencies of the white light falling on it. The remaining frequencies are reflected to make the paint appear blue. In practice the blue paint will reflect frequencies corresponding to the spectral colours blue, some green and some indigo or violet, with the result that the overall colour appears blue.

The yellow paint also absorbs a number of frequencies of the white light falling on it. The frequencies that are reflected make the paint appear yellow. In practice, the yellow paint will reflect frequencies corresponding to the spectral colours yellow, some orange and green, with the result that the overall colour appears yellow.

It is an interesting fact that mixing all of the colours of the spectrum:

Can you explain why this happens?

With the mix of paints, all of the colours are represented and so all components are removed (or absorbed) from any white light that is incident on the paint. The mix of paints therefore appears black (no light is reflected).

With the mix of light all of the colours add together to produce white.

Noticing and accounting for colour

Paint has a particular colour because it only reflects a certain range of frequencies. If that range is not in the beam shone on the paint, then nothing gets reflected.

The eye has only three colour sensors: hence the three-colour theory of vision. Different combinations of spectral colours can all appear to be the same perceptual colour.