Circular motion is frequently observed in nature; it is a special case of elliptical motion, such as the orbiting of planets under gravity. Once students have a grasp of the mechanics of linear motion in one or two dimensions, it is a natural extension to consider circular motion.

There are several demonstrations in this topic which can add a lot to the interest of the subject. It is useful to practise them in advance, to avoid embarrassing failures in front of the students. 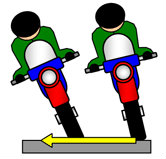 A useful source of material is Multimedia Motion II, from Cambridge Science Media. This CD-ROM contains many excellent video clips of motion including that showing an object moving in a horizontal and vertical circle. The position, velocity and acceleration of the object can be analysed.

Students should be familiar with the equations of linear motion, and Newton's laws of motion.

Circular motion crops up in many different situations, and students will need to be able to apply the equations for centripetal force and acceleration. For example:

In this episode, you will introduce the importance of circular motion and explain the need for a centripetal force to keep an object moving along a circular path.

Motion in a circle is an everyday occurrence and the students should be given time to discuss their experiences of such motion. It is important that they should actually feel the force exerted when an object on a string is whirled round their head.

Invite suggestions of objects which move in a circular path:

Remember that motion in a circle is only a special case of motion in a curve. So why do we study it? It is fairly common and the maths is easier!

The whirling bucket is the classic centripetal force experiment. Put a little water in a bucket – tie a string firmly to the bucket handle and then swing the bucket in a vertical circle. As long as the rate of rotation is great enough the water stays in the bucket! Slowing the rate of rotation can get the water to almost fall out at the top of the path and you can usually hear it slopping around at this critical point.

Make sure that the handles of the bucket do not come off and that the bucket does not hit the floor at the lowest point of the circle, or the ceiling. Many extensions of this are possible such as swinging a tray loaded with beakers by four strings!

This is best done outside; in any case avoid the temptation to stand on anything.

Check that your students understand the direction in which this force acts – towards your hand. You can only pull string along its length. Explain the name: centripetal means centre seeking. Centripetal is an adjective describing the force; it is not the name of a special type of force, such as tension, gravity, magnetic force etc.

(At the same time, you can feel a force pulling on your hand. This force is the equal and opposite reaction to your pull. Since it acts outwards from the centre of the circle, it can be described as centrifugal , or centre-fleeing. However, you may wish to avoid this term, and ask your students to stick to centripetal to describe an inwards force.)

Pull open a wire coat hanger so that it forms a square. File the end of the hook flat and then bend the hook until it points towards the opposite corner of the square. Balance a 1p coin on the hook, put one finger in the corner of the square opposite the hook and then spin the coat hanger in a vertical circle – the coin stays in place! This is a very simple but excellent demonstration of centripetal force.

The force of the hook on the penny always acts towards the centre of rotation. Can you beat the record (five 1p pieces stacked on top of each other)? With only one penny balanced and with great care you may be able to bring the coat hanger to rest without the penny falling off.

What produces the force to keep the object in a circular path?

The actual way the force is produced depends on the particular example:

Gramophone needle  →  the walls of the groove in the record

Aircraft banking  →  horizontal component of lift on the wings

So a centripetal force may be a contact force or electrostatic, magnetic, gravitational, etc.

Why must there be an unbalanced force if an object is to follow a circular path? Emphasise Newton’s First law. If an object is to move in a circle there must be a force pushing or pulling it out of the straight line path. This force must act towards the centre of the circle and it is this that we call the centripetal force. It is the unbalanced force on the orbiting object.

Imagine whirling a stone on the end of a string, so that it follows a horizontal orbit. If you remove the centripetal force by cutting the string, the stone will move off along a straight line along the tangent to the circle (ignoring gravity for a moment) and not along a radius.

Talk to the students about the following two examples of circular motion in practice:

Sitting in the back seat of a car as it corners: If the car turns to the left, you feel as if you are being thrown to the right. In fact, your bum is in contact with the seat, and gets pulled round to the left (providing there is sufficient friction). The upper half of your body tries to carry on in a straight line. Viewed from a point above the car, your upper half will be seen to be trying to follow a tangential path while the car turns to the left.

Watching a marble roll on the surface of a table in a train as the train corners: again, if the train turns to the left, the marble will appear to drift off to the right. It is following a straight line path, tangential to the curve. There is no friction to pull it to the left, so no centripetal force.

Try out a number of other experiments on circular motion.

This episode discusses: linear and angular velocity; degrees and radians; and angular acceleration. And is accompanied by worked examples, student question sets, a student experiment and a demonstration.

Explain the difference between linear and angular velocity.

The instantaneous linear velocity at a point in the circle is usually given the letter v and measured in metres per second (m s-1).

The angular velocity is the angle through which the radius to this point on the circle turns in one second. This is usually given the letter ω  (Greek omega) and is measured in radians per second (rad s-1) (See below)

Time period for one rotation:

Therefore linear and angular velocity are related by the formula:

Linear velocity of stone at any point on the circle is 3 m s-1 directed along a tangent to the point.

Note that although the magnitude of the linear velocity (i.e. the speed) is constant its direction is constantly changing as the stone moves round the circle.

You will have to explain the relationship between degrees and radians. The radian is a more natural unit for measuring angles.

One radian (or rad for short) is defined as the angle subtended at the centre of a circle radius r by an arc of length r.

Some radian ideas and practice calculations of v, ω .

If an object is moving in a circle at a constant speed, its direction of motion is constantly changing. This means that its linear velocity is changing and so it has a linear acceleration. The existence of an acceleration means that there must also be an unbalanced force acting on the rotating object.

Consider an object of mass m moving with constant angular velocity ( ω ) and constant speed (v ) in a circle of radius r with centre O.

When θ becomes small (that is when Q is very close to P) sin( θ ) is close to θ in radians.

Dividing both sides by t gives:

Since we also have

this can be written as

This is the equation for centripetal force; students should learn to identify the appropriate form for use in any given situation.

(a) the centripetal acceleration of the stone

(b) the centripetal force acting on the stone.

Student experiment: Verification of the equation for centripetal force using the whirling bung

Episode 225-3: Verification of the equation for centripetal force (Word, 28 KB)

A Java applet version of this experiment is available on the National Taiwan Normal University website.

Demonstration: Alternative method of verifying the equation for centripetal force

This demonstration is an alternative method of verifying the equation for centripetal force.