By providing information about the misconceptions and issues that pupils have when learning physics, we hope that teachers will gain a sense of the kinds of issues that might come up when they teach areas of physics. The misconceptions noted here and in the misconceptions area are those which have a basis in research, reviewed through the PIPER project, so we know that within the data sets explored by the researchers involved these were issues that came up. Of course, we could never provide a comprehensive list of all the ways of thinking about physics that young people bring to the classroom. Indeed, one of the joys of teaching is encountering the ways that people think about the world. Despite the unique nature of each setting and everyone's thinking, there are some general considerations which we hope would be useful.

Substantial evidence suggests that the holding of misconceptions can prevent pupils’ further understanding of physics. As such, a key element of teaching physics is assessing pupils’ current understanding, and deciding how to proceed accordingly.

There are many different ways of doing this. You could:

Now we are aware of this potential stumbling block, we could assess pupils’ thinking by asking them to explain, discuss or draw the motion of a bowling ball being thrown out of a horizontally-moving aeroplane.

This question appears in a well-known research tool called the Force Concept Inventory, developed in the 1980s. Here, pupils are asked to choose between five different possible trajectories for the ball, and their answer reveals something about their thinking. Those who select a trajectory in which the ball falls straight downwards, for example, may not have understood that the horizontal momentum of the ball inside the aeroplane will be conserved.

Learning, of course, isn’t always a simple matter of going from ‘incorrect’ to ‘correct’ in a linear fashion. Learning involves continually developing ways of thinking. For instance, returning to the example above, a pupil may later recognise that the ball will move forwards and downwards. But they may think that it first moves forwards, and then falls straight downwards. Here, the pupil’s thinking has developed, but is still not fully correct.

This suggests a couple of things for educators to be aware of. Firstly, that a decision on when to assess pupils must be made: assessing a pupil before first teaching them, say, atomic physics might not be useful, since they are unlikely to have developed misconceptions about this fairly abstract topic. Conversely, pupils may already have ideas about motion and forces from everyday experience. Secondly, assessment should be an ongoing and open process: assessing once, and then tailoring one’s teaching to the static picture given by the assessment is unlikely to capture how pupil thinking develops over time.

The resources on the IOPSpark Misconceptions pages can help you familiarise yourself with patterns of student thinking, and, where possible, offer tools to help you assess and diagnose misconceptions in the classroom.

Once you have a clearer picture of the sorts of ideas your pupils might have about physics, the next question to consider is: how can you help develop these ideas to challenge misconceptions and deepen their understanding of physics?

The process by which concepts develop continues to be a topic of active research for the education community, and there is no one accepted theory of how it happens. Loosely speaking, however, four mainstream positions exist, with each suggesting different ways for a teacher to promote conceptual change in learners.

According to the coherence theory, learners develop ideas in a way that aims for coherence. Naive ideas may be internally coherent, from the perspective of the learner, and will be inherently resistant to change because new information is judged against the already-accepted, internally coherent theory. This means that a new idea may be rejected if it does not fit with the learner’s existing ideas.

Modern research using neuroimaging techniques suggests that in many situations experts experience the same misconceptions as novices. The difference between the expert and the novice, however, is that the expert can subconsciously ‘suppress’ the misconception to arrive at a more developed pattern of thought. This suggests that conceptual change does not consist of removing naive ideas and installing scientific ones in their place, but rather training the latter to preside over the former.

Some researchers have argued that knowledge, be it scientific or not, is a common property of the social groups that hold it. This view is associated with sociocultural theorists, who emphasise the role of discussion, the way in which we speak, and non-verbal communication in our understanding of conceptual change. 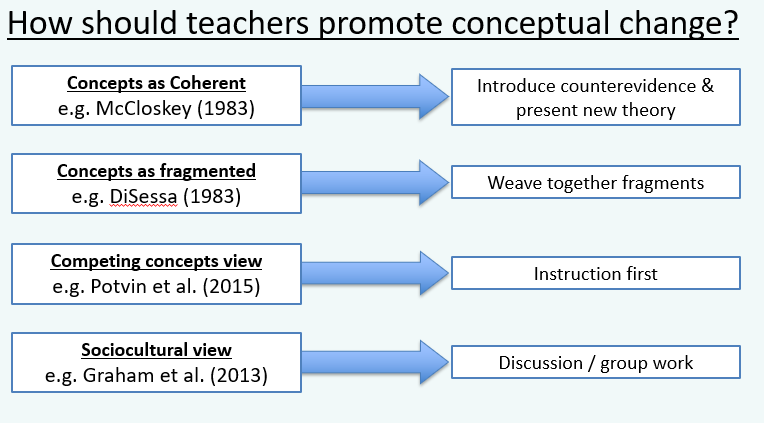 Whether you’re a technician, a teacher, the head of your department, or someone involved with the running of a school or a multi-academy trust, you are an important part of the curriculum-making process. After all, curriculum development doesn’t start and end with a national curriculum---interpreting and structuring its content, planning and teaching lessons, and managing the context in which students learn (through, for example, the use of practical activities) all have a profound impact on learners’ understanding of physics. And this is an area where the IOPSpark Misconceptions page can help too.

IOPSpark can help with the curriculum development process in several ways. Here are some steps you might follow to get you started.

A misconception from IOPSpark. On the right hand side, you can quickly see how many references we have for this misconception (and therefore how likely you are to find it!)

After this, try to map common misconceptions to your curriculum document. Think about where they might be encountered, and how different areas might lend themselves to different instructional techniques. Teachers will have to exercise their judgement here.

Then think about the ways that misconceptions can be challenged in each area. Because there is no single, correct way of inducing conceptual change, IOPSpark does not offer hard-and-fast advice for doing so. However, each misconception on IOPSpark suggests resources elsewhere on the site that may help teachers to develop student thinking. 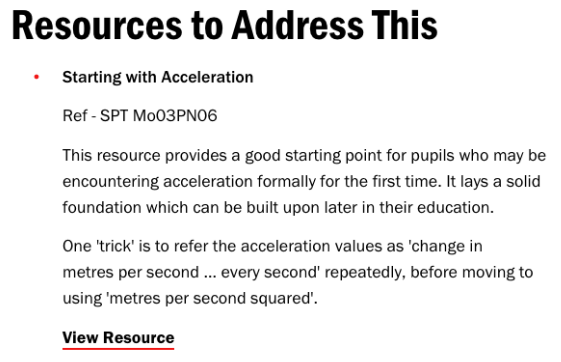 These suggestions will prompt you to think about the contextualisation of topics in the curriculum, and to understand how the setting in which a student learns a topic can be the difference between a scientific and naive conception.

Developing your own understanding of Physics

One of the benefits of familiarising yourself with common student misconceptions is that it may help to develop your own knowledge too!

In his 1986 article, Those Who Understand: Knowledge Growth in Teaching, Lee Shulman suggests we think about three, overlapping types of teaching knowledge. The first of these is content knowledge, which, for a physics teacher, might comprise things like knowing the relationship between electrical current, voltage and resistance, or knowing that objects fall under gravity at a rate independent of their mass. Having physics content knowledge is knowing about physics.

The IOPSpark misconceptions resources may improve your physics content knowledge by simply filling in any gaps you might have. With the growing need for physics teaching to be carried out by teachers whose specialism is in another subject, it is entirely understandable that some teachers of physics may find themselves grappling with their own misconceptions from time to time. Furthermore, even trained physicists have areas in which they are less confident. In either case, reading through the IOPSpark Misconceptions pages and, where necessary, taking a look at the Resources to Address This section for each misconception can be a great help.

The second type of knowledge is what Shulman called pedagogical content knowledge, and it’s different from just knowing about physics: it’s knowing how to teach physics. It’s knowing which analogies you can use to explain a complicated idea; which illustrations you can draw on the board to help struggling students; and which demonstrations complement the physical concepts you’re trying to communicate to your class.

Since pedagogy must be adapted for different contexts, classes and students, the most useful pedagogical content knowledge will depend on who, where and what you’re teaching. However, consulting IOPSpark Misconceptions before you plan a lesson or curriculum can help develop your pedagogical content knowledge by encouraging you to reflect on how the activities you use in the classroom might relate to (or even enforce) certain misconceptions, and by making it easier for you to anticipate common student pitfalls and incorporate these into your lesson planning. It may be useful to revisit the Developing Pupil Thinking article from earlier in this series to remind yourself of how conceptual change can be encouraged. In particular, take note of how your planning process changes as you start to anticipate the misconceptions you might come up against.

Shulman’s last type of teaching knowledge is curricular knowledge. Picture teaching as the task of taking a learner from point A to point B: If content knowledge is knowing where the points are, and pedagogical content knowledge is knowing how to get from one to the other, then curricular knowledge is about knowing not just one way of getting between the two points, but many. To borrow Shulman’s own analogy, much as an expert doctor will know a full suite of different treatments for a given illness, an expert teacher will be familiar with a wide variety of routes between points in the physics curriculum.

The IOPSpark misconceptions resources can help develop your curricular knowledge too: understanding the specific misconceptions you may encounter in your teaching will encourage you to reflect on how different misconceptions might require you to pivot from one intended path along the curriculum to another. It may also be useful to revisit the Developing Curricula article from earlier in this series.