When a battery is connected to a bulb to make a complete circuit, the bulb lights up. If you are interested in understanding how electric circuits work, this familiar event raises a number of questions.

While the bulb is lit the battery is flattened and the filament of the bulb glows and light is emitted (see the SPT: Energy topic and the SPT: Electric circuits topic for more detail).

Most of this Physics Narrative is for your benefit, and there is just too much here for primary-age children.

Electric current: a flow of charges

Electric current is a flow of charges

When the battery is connected up to the bulb to make a complete circuit, there is an electric current everywhere in the circuit. Something flows steadily. That thing is charge, and there can be many different objects that carry the charge.

The charges originate in the circuit itself. They are already there. That is what it is to be an electrical conductor – to have charges that can move when the conductor is connected into a complete circuit.

In metal wires we now know that the charges that drift are negative (but it's not at all easy to show this until post-16 study.). That's what's shown in the top pair of diagrams here. But in many other cases, the charges that drift are positive (e.g. conduction in nerve cells, electrolysis). We think it's best to be agnostic about the charges, but not about the current in the loop: something flows, and the flow is the same at every point in the loop. But we'd suggest representing the direction of conventional charge flow, as in the bottom diagram (where the charge carriers are positive) if you do choose to think about charge flows.

The current is the same at each point in the single circuit loop – there are no leaks! And no charge accumulates at different points.

In metallic wires the electrons are the moving charges and originate in the wires of the circuit. They are simply part of the atoms that make up the battery, wires and bulb. When these components are not connected into a circuit, you might imagine their insides as a gas of free electrons pinging around the fixed grid of positive ions.

In nerves and electrolysis the current is not carried by electrons. To have a general model to reason with, we suggest you think of electric currents in terms of a flow of charges, because this covers all cases.

Electric currents do not get used up

Electric currents do not get used up. In a simple circuit with one battery and one bulb, the size of the electric current is the same wherever you measure it.

There are no side-paths down which the charges can pass and the charges themselves cannot just disappear.

Current as flow of charge

Later, we'll build on these ideas by considering what happens when changes are made to our simple circuit, and how we can use the electric circuit model to both predict and explain what happens.

Consequences of a slow drift 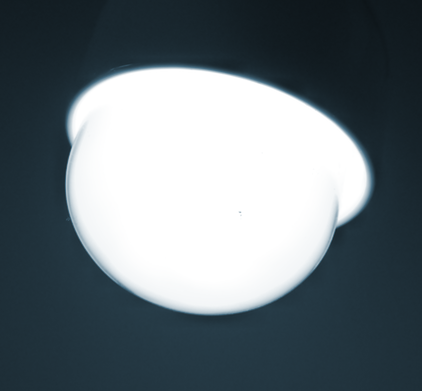 In a complete circuit charges drift round at a speed of about 1 centimetre per minute. This is important, and very slow (try moving at 1 centimetre per minute). Think about a very big circuit – so the connections between the battery and bulb are made with very long wires. When the big circuit is completed, the bulb appears to light immediately. Think about this for a while. The effect of the current in the bulb is immediate, yet the charges that started in the battery have scarcely left the terminals. So any model in which charges carry energy or take energy from battery to the bulb in order to light the bulb will clash badly with this experience. If the big circuit runs from the front of the classroom to the back, such a model predicts that the bulb might then take 10 hours to light up! What happens, of course, is that as the circuit is completed, all of the charges in the circuit (including those in the filament of the bulb) start moving together and the filament warms up instantly. That's why it's not a good idea to say energy is carried from battery to bulb.

The rope loop teaching model offers a convincing account of this experience, that does help you picture what's really happening.

The direction of the electric current

A convention for direction

Scientists agree to use a convention which shows the direction of the electric charge flow (the current) in a circuit as being from the positive terminal of the battery towards the negative terminal. This is in the opposite direction to the actual flow of electrons – the most common moving charges in metal wires, so in most classroom circuits, and in many situations in the home as well.

This somewhat unhelpful state of affairs came about because the convention was established before it was known that electrons move through the wires of a circuit.

The current direction convention is not important for understanding electric circuits and we'd suggest not making a big fuss about it in the discussions you have with children. You can think about something flowing and not worry to much about exactly what is flowing.

There are three steps in this episode.

What happens when a second battery is added to the circuit so that we now have two batteries and one bulb?

When the circuit is completed, the bulb lights up and it is now brighter than normal. How can we explain this observation using the electric circuit model?

The first effect is simply that there is a larger current; adding more batteries increases the current in every element in the loop.

Notice that the current is the same everywhere in the loop.

Thinking about the electric circuit model

There are two effects that contribute to the bulb being brighter. The batteries maintain the faster motion of the charged particles, so that:

The model to develop is one where adding the extra battery results in more charged particles passing through the bulb per second, with each shifting more energy. So more energy is shifted in each second and the bulb is brighter.

What happens when a second bulb is added to the circuit, so that we now have one battery and two bulbs all connected in series, in one single loop?

When the circuit is completed, both bulbs light up. However, this time they are not as bright as the single bulb: they are now equally dim. How can we explain this observation using the electric circuit model?

The effect of adding the second lamp

The effect of adding a second bulb in series is to increase the overall resistance of the circuit. The resistance previously provided by the thin filament wire of just one bulb is now doubled due to the presence of two.

It is worth emphasising here that the total number of charged particles moving around the circuit has neither been reduced nor increased.

The charged particles have simply been slowed down all around the circuit by adding resistance.

Given that there are now two equal resistances in the circuit, and bearing in mind that energy is shifted wherever there is an electric current in a resistance (first met in episode 01) you should focus on the resistances. These are equal, so the forces on the charged particles in these resistances will be equal. What else could they be? So the same amount of energy is shifted at each resistor: same push and pull on each charge; same number of charged particles passing through each resistor.

There is no difference: the resistors or bulbs are identical, so what other possibilities need we consider?

The bulbs are dimmer because adding the extra bulb increases the resistance and reduces the current everywhere in the whole circuit.

As a result fewer charged particles per second pass through each bulb and each charge shifts less energy as it passes through the filament.