Boyle developed a purely mathematical relationship between pressure and volume. His experiment still provides a good starting point for the study of the gas laws, and the underlying kinetic theory that explains them.

As with a spring, force is required to compress or to expand a gas.

Ensure that there are no needles available to fit on the syringes. 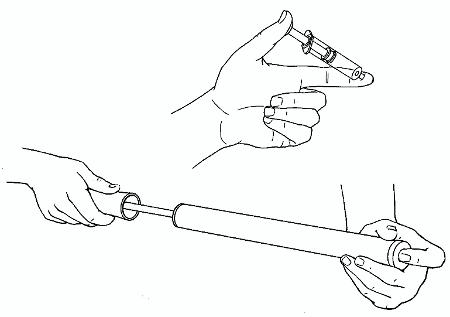 Either a domestic balance or a lever-arm balance can be used for this experiment. Turn over the scale pan so that the balls bounce off without collecting on the pan. Place a deep tray under the balance (or set up a barrage of books round the balance) to catch the balls.

Pour, by hand, a stream of balls, from a height of 30 cm or so, onto the inverted scale pan on the balance.

This is a larger, more dramatic version of:

Eye protection must be worn. The teacher must stand on a step-ladder to release the balls, not on a stool or on a bench.

Construct a see-saw with a massive elastic anvil at one end. You can make a very good version by placing a sheet of about 13-mm Perspex on top of a massive steel block, with a thin layer of glycerine between them. Screw the Perspex into the steel near the edges.

The anvil should be placed on a large wooden beam, which is pivoted near that end. The pivot could be a steel rod, fixed to the beam, free to roll on supports at the side. The other end of the beam must carry a counterweight and a pointer to indicate deflections.

Place a large tray under the apparatus (or make a barrage around it) to catch the balls. (An inflatable paddling pool may be suitable.)

Pour a stream of marbles or steel balls from as high as possible above the anvil and the see-saw shows there is a deflecting force on the beam.

It helps if there is a release mechanism so the marbles or steel balls fall vertically onto the anvil. This is not an easy demonstration to set up but it is impressive when working.

It has been known for the glass tube to fly upwards when the gas is at maximum pressure. To prevent this, check the compression joint holding the tube and any tube supports before use. (The apparatus is filled and emptied by removing the pressure gauge.)

The apparatus has been specially designed to give quick, clear readings which the class can see.

A sample of dry air is confined in a tall, wide glass tube by a piston of oil. The volume is found from the length of the air column, which should be clearly visible at the back of the class.

The pressure is read from a Bourdon gauge connected to the air over the oil reservoir. This is calibrated to read absolute pressure and is also visible from the back of the class.

The foot pump is attached to the oil reservoir and is used to change the pressure. The gauge reads up to 3 x 10 5 N m -2 and the pressure can safely be taken up to this value but must not be taken beyond.

To fill the apparatus with oil, unscrew the Bourdon gauge with a spanner and fill the chamber with a low vapour pressure oil. Tilt the apparatus in the final stage of filling in order to get enough oil into the main tube. When refixing the gauge, tighten the nut to get a good seal, but not so much that the thread is damaged. 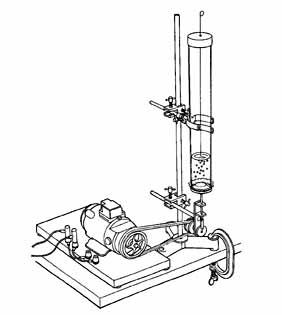 See the warning on the apparatus page on the use of a:

Connect the DC terminals of the variable voltage supply in parallel to the field and armature terminals of the motor. About three dozen small, phosphor bronze balls are needed. Put the paper disc, with wire attached, in the tube as a piston. The wire goes through the hole in brass cap which should be put over the top of the tube.

Add cardboard weights on top of the disc to increase the pressure on the gas.

(More modern versions of this apparatus are available, of course.)

Why does reducing volume increase pressure?

Why does reducing volume increase pressure?

Watch out for marbles which may roll accidentally onto the floor. 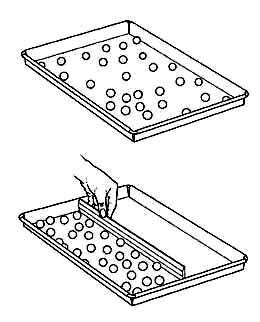 This experiment is quite elaborate, but it yields quantitative results. A beam balance weighs the pressure. 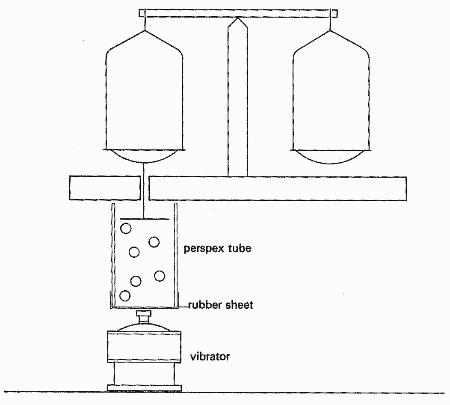 Hang a light piston of aluminium sheet by a thread from one side of a beam balance. The thread needs to run through a hole in the floor of the balance.

The piston should fit loosely in a wide vertical cylinder, about 10 cm in diameter.

Fix a rubber sheet over the base of the cylinder and place some large plastic balls, such as those used for electrostatic experiments, into the cylinder.

Statistical studies, combined with the assumption that every molecular collision is elastic, lead to the conclusion that the molecules of all gases at the same temperature store the same amount of energy kinetically. This ignores one very important physics principle, the equi-partition of energy theorem.

The full form of this theorem states that each degree of freedom will on average have the same energy. The linear motion of molecules entails three degrees of freedom – motions in the x, y and z directions. A gas whose molecules are simple atoms, such as helium or neon, has only these three kinds of motion. A molecule made from two or more atoms, however, can move in additional ways: it will have rotations and vibrations.

At the beginning of the twentieth century, it seemed clear that equi-partition should apply to the energies of rotation and vibration. However, certain experiments, such as those measuring thermal capacities over a wide range of temperatures, threw increasing doubt on this. The full form of equi-partition theorem failed, and quantum theory explained why.

Equi-partition among linear motions still applies. All gas molecules, at a given temperature, have the same average kinetic energy.

So you can compare molecular speeds if you know the relative molecular masses.

Another equation derived from the kinetic theory of gases: pV = 1/3 Nm < c 2 > where p is the gas pressure, V is gas volume, N the number of molecules, m their mass and < c 2 > their mean square speed. This equation tells you that equal volumes of gases at the same pressure and temperature must contain the same number of molecules (Avogadro’s rule).

A simple theory of a gas

A simple theory of a gas

The atoms or molecules in a gas are widely separated from one another and interact only when they collide. Each one changes its direction of travel only in collisions. This theory of a gas relates macroscopic quantities that we can measure (such as pressure, volume and temperature) to the motion of its molecules. Developed in the nineteenth century, it is called kinetic theory because the molecules are always in motion.

Suppose the pressure of the gas on the walls is produced by the impact of bombarding molecules. Attach a pressure gauge to the box and read the pressure.

Now suppose that you put more and more molecules into the box until there are twice as many as before. The picture below shows a microscopic demon popping in additional molecules one by one, through a trap door.

Of course with more molecules, collisions would also happen more often in the middle of the box. But those internal collisions would not affect the bombardment of the walls, for the following reason. Suppose there are two molecules moving in opposite ways, heading for opposite ends of the box, where each will add its contribution to the pressure. If they do not collide, but just pass each other, each will arrive at its target end. If they do collide head-on, they will rebound, elastically. Then each of them takes on the other one’s job and does what the other would have done without a collision.

There is another way that you could double the density. Push the end wall of the box in, as a piston, so that the air occupies half the volume. Result: the pressure gauge would show the pressure doubling. So collision theory leads to a prediction: Halving the volume of a gas will double its pressure. Does experiment confirm this is true?

Robert Boyle did an experiment to investigate the relationship between pressure and volume more than three centuries ago. He was not testing a theory, but simply taking measurements. In 1661 he announced his result ‘concerning the spring of air’ to the Royal Society. It is now called ‘Boyle’s law’. Provided the temperature is kept constant, the product of gas pressure and volume is constant.

Also molecules attract each other when they are fairly close, as surface tension shows. This effect decreases gas pressure when molecules are crowded close together and moving slowly, at low temperatures. Some of the slowest molecules are weeded out and never reach the walls. There is a less dense layer near the walls and that exerts smaller pressure.

In real gases, both of these effects are found at high pressure and small volumes, but they can be distinguished because they change in different ways with temperature. At low temperatures the effects of molecule size remain much the same, but the effects of attraction make themselves felt so strongly that gases can liquefy.