To make anything move along a circular path it is essential to have a force that acts towards the centre of that path.

The word centripetal is a combination of two Latin words: centrum meaning centre and peto meaning to go in. The centripetal force goes in towards the centre.

It's necessary to have a centripetal force to maintain a circular motion because if there is no resultant force acting on an object (that is all forces acting on the object add to zero), then the object travels with uniform motion in a straight line, or stays at rest. 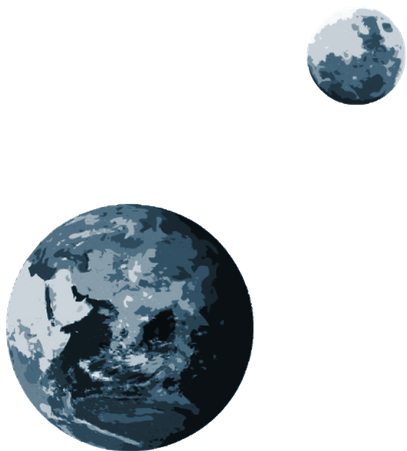 This is an expression of Newton's first law of motion (see the SPT: Motion topic). If you want to change the motion of an object and make it follow a circular path, you must exert an inward centripetal force.

In the case of the rubber bung, the centripetal force is provided by the tension in the string. In other words the string provides a continuous force on the bung, tugging it along its circular path.

When the string is cut the centripetal force is removed and the bung leaves its circular orbit, continuing along a tangential path.

In the case of the Moon orbiting the Earth, or the Earth orbiting the Sun, it is not an invisible string which tugs each body along its circular path, but the force of gravity. For any Earth satellite it is the gravitational pull of the Earth on that satellite which keeps it moving in its orbit.

Before Newton, people used to think that circular motion was natural and needed no explanation. Newton's great insight was to realise that motion in a straight line is the natural form of unforced motion and that it is circular motion that requires an explanation.

This led Newton to ponder on the nature of the force that keeps the Moon in orbit around the Earth. The incident that is supposed to have suggested the answer to him was the apple falling on his head. If gravity can act between the Earth and the apple, why should it not also act between the Earth and the Moon? Newton's subsequent calculations led him to the idea that gravity is a universal force acting between all objects.

Class practical: Measuring the variables involved in circular motion, to find out whether the formula for centripetal...