Electrostatic induction is a quick way of using a charged object to give something a charge, of the opposite sign, without losing any of the original charge.

Check the tin cans before use for a sharp edge where it was opened. Remove it if necessary by pressing it outwards with a steel rod. 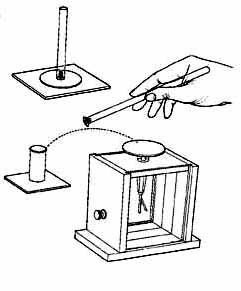 Historically, the first observations and experiments with electricity involved...

Demonstration: Electrostatic forces are an example, like gravitational and magnetic forces, of "action at a distance".

The device is used for detecting electric charge and can also identify its polarity, if compared with a known charge.