Finding out speed from a distance and a time 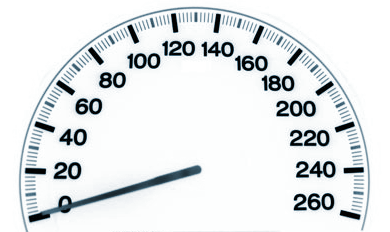 A car speedometer tells us the speed of the car at a particular instant, giving a prediction for the number of metres closer to Charlie – standing ahead on the roadside – it'll be getting in each second. If we continue to convert time to distance at this rate, then we'll know how many metres it is closer to Charlie. A constant speed increments the distance at a fixed rate – the instruction is to add so many metres in each second. Run that accumulation for the number of seconds and predict where you will be.

Back to the car seat: Just look down and you know straight away how fast you are going, at least over the road. Such a speed is called an instantaneous speed. It is the speed at that particular instant. Even this is not strictly instant – but it's quite close as the change in distance is measured over a very short duration. Shorten the duration and you get closer and closer to instantaneous.

Just like speedometers, genuine instantaneous speed meters are rare (more in the SPT: Radiations and radiating topic). For many experimenters, speed is a quantity which needs to be calculated using the relationship:

speed = distance travelledtime taken The units of speed, for example metre/second (m/s) or kilometre/hour (km/hr), reflect the idea that speed is expressed as a distance divided by a time. When introducing pupils to measuring times and distances to find out speeds it is a good idea to select examples where the speed is constant. A body travelling at constant speed covers equal distances in equal times. Walking down an empty corridor is an example of something moving at a constant speed.

The purpose of the activity is for pupils to recognise that speeds can be ranked by comparing times, provided that the...

The purpose of this activity is to focus pupils' attention on the idea of speed, where it occurs in everyday life and what...