Calculate the efficiency of a motor in two ways

Practical measurements and calculations as exemplars to learn from.

In this activity a motor is used to lift a load. The efficiency of the motor is calculated in two ways: 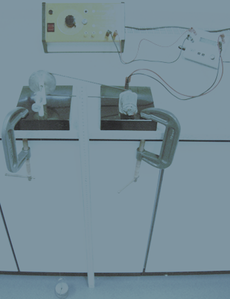 This account includes sample values to give an indication of the kind of values expected. Your own values may differ and should be used.

Set up the equipment to lift a mass of 400 gram through a distance of 80.0 cm. Blu-tack a 1 metre ruler close to the load to show distance moved clearly. Have the SEP energy meter set to read energy and the power pack set at 5 V DC.

Teacher: So, we're using a motor to lift a load from the floor. We have an energy meter, which is connected directly to the power supply to let us know how much energy is being shifted from the store. The kind of store depends on our local power station. Here we burn gas, so it'll be a chemical store.

Teacher: How much energy is shifted to the motor?

It's probably worth writing this on the board:

Energy shifted from the chemical store is 21.7 joule

Teacher: Excellent, and you used the correct unit too. The gravity store is filling as the load is lifted. How could we calculate how much energy is shifted to the store?

Teacher: Good. Now we can calculate the energy shifted as the load is lifted further from the earth.

We'd suggest writing this on the board (don't forget the units to make it more intelligible):

Teacher: We know that energy is neither created nor destroyed, so why is this change not the same as that shifted from the store?

Julie: Energy must have been shifted to other stores: stores that are not useful.

Explain that there is also energy being shifted to thermal stores. Now calculate the efficiency of the motor on the board using the equation.

A clear written-out calculation can serve as a good model, perhaps written on a board.

If all of the power in the electrical working pathway is switched to mechanical working, then the efficiency is 100 %. So efficiency can also be calculated using power values. After this preamble we suggest you get a new set of measurements to get these data.

Teacher: What do we need to know if we want to find the average power in the mechanical working pathway as the load is lifted?

David: The force required to lift the load and the speed of the load.

Lift the load as before, recording the average power shifted to the motor as read from the SEP meter and the time taken to lift the load.

The average input power to the motor is 4.34 watt

Now for some efficiencies:

This activity has been written containing only one lifting of the load for the energy and power calculations for ease of explanation. It could be run several times and average values used to calculate the efficiencies.

Some possibilities to extend the experiment:

Demonstration: Students ‘experience’ forces and reinforce their understanding of force and energy units.

Using an electric motor to raise a load

Here you can impart an idea of the relative values of different efficiencies. Having such an idea for different devices and...

Many pupils think that a battery supplies the same current, regardless of the circuit in which it is used.

Many pupils cannot identify reliably from a diagram whether or not two resistors in a circuit are in parallel when they are drawn in an unfamiliar format.

Some younger pupils hold a 'consumer-source' model of the simple circuit.