This demonstration focuses on the properties of beta particles. It follows closely from

You can show that beta radiation is deflected in a magnetic field; this is an impressive and striking demonstration.

This experiment puts the demonstrator at a small risk of receiving a dose of β radiation. The demonstrator should avoid leaning over the source and, if it cannot be avoided, should reduce the exposure time as far as possible. There are safer versions of doing this experiment which use a collimated beam and much smaller magnets.

Note that 5 μCi is equivalent to 185 kBq

Geiger-Müller tubes are very delicate, especially if they are designed to measure alpha particles. The thin, mica window needs a protective cover so that it is not accidentally damaged by being touched.

Education suppliers stock a set of absorbers that range from tissue paper to thick lead. This is a useful piece of equipment to have in your prep room. You can make up your own set. This should include: tissue paper, plain paper, some thin metal foil (e.g. cigarette wrapping from a chocolate from an assortment box, and a small piece of gold leaf.

To cut off the direct path in step 4 , the lead block from the absorbers kit is just adequate, but a block with a bigger area is better. 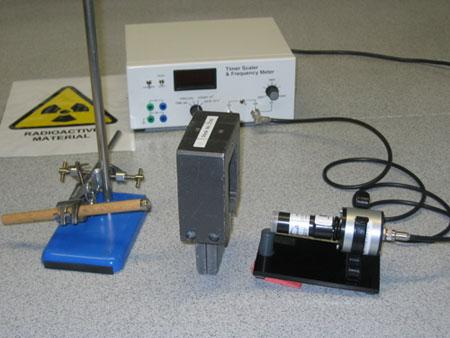 Ionising radiations and their properties

Through the experiments in this topic, students can develop their own ideas of what...

The purpose of this collection of resources is to support the teaching of ionizing...

The hill is a 1/r shape (the same as the electrical potential around a nucleus due to its electric charge).

Where does ionising radiation come from?

The initial discovery and identification of alpha, beta and gamma radiation provides an interesting case for how science works...

Where does gamma radiation come from?

Making the wrong connections in thinking about the production of gamma radiation.