The history of cells

In 1791, Luigi Galvani, an Italian physiologist, laid out a frog on a metal table prior to dissecting it. As he sliced through it with a metal knife, he observed the twitching of muscles, which he attributed to animal electricity. Later, when preparing further specimens by hanging them out of doors to dry, he observed muscle contractions if the copper hooks upon which they hung came into contact with iron fence wire. Galvani concluded that electricity resided in the frog's nerve juices, and that the metals in contact allowed the animal electricity to flow.

A second Italian scientist, Alessandro Volta, disputed this, claiming that the electricity originated within the metal parts of the circuit. The controversy was resolved when, in 1800, Volta produced the first Voltaic pile; an electric cell. After touching connected pairs of different metals on his tongue to sense the small voltages, Volta constructed the first cell from alternate discs of zinc and silver, separated by absorbent disks soaked in water. He communicated his findings in a letter entitled On the electricity excited by the mere contact of conducting substances of different kinds.

In their simplest form, modern cells consist of two electrodes of differing materials separated by an ionic solution. When the terminals are connected by a conductor, electrons flow from one side to the other enabling chemical reactions to take place. As these reactions proceed, the chemical store of energy associated with the battery is depleted. Once all the available chemicals have reacted, the cell can no longer shift energy from its store, it is dead.

The amount of energy shifted by the cell as each unit of charge is pushed through the cell (all as a result of the chemical reactions) depends upon the materials used in the cells. The materials most commonly used typically produce a 1.5 volt cell (1.2 volt for certain rechargeable types). A battery (a number of individual cells connected one after the other in a single line – in series) provides a greater voltage. The packaging of a standard 9 volt battery hides six 1.5 volt cells connected in series (more information about voltage follows in episode 03).

A simple electrical cell can be made with fruit and two metals:

You now have a cell. Unfortunately the energy available from this cell is rather limited. It's only a small chemical store. 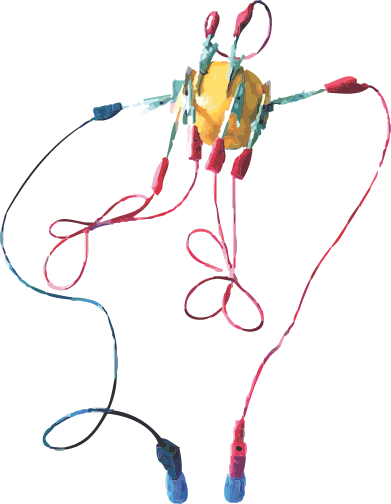 Connect several (five or six) separate fruit cells together, use normal lab wires with crocodile clips to connect the fruits, copper to zinc each time.

Connect a light emitting diode (LED) between the terminals of the first and last fruit. It may light. If not, switch it around as the direction of the electric current in the LED is important.

This is an interactive teacher demonstration with a difference. It involves working not with apparatus, but with numbers in...

Although commercially available, it is cheaper to make your own dough. Why not get your class to build a circuit out of...

To analyse a circuit usually means that you calculate all of the potential differences and currents from the cell potential...

Many younger pupils expect all metals to be attracted by magnets and think that the size of the magnet dictates its strength.

Many students think that electric current or electric charge (or 'electricity'), rather than energy, is stored in a battery.

Few pupils use the Voltage-Resistance-Current (VRI) model of a series circuit.

The IOP is proud to present our new Forces CPD Domain

This is the first of a collection of videos for you to view ahead of our live support sessions for teachers and coaches of physics.