Batteries come in many shapes and sizes, often of different voltage 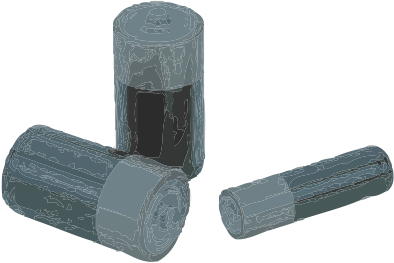 The batteries commonly used in school science practical work are torch batteries rated at 1.5 volt. If two of these batteries are connected into a circuit one after the other (in series), the total rating is 3.0 volt. If three batteries are used we have 4.5 volt and so on. A single 9 volt battery might be used to supply a radio, whilst a 12 volt battery is used in cars.

A key specification for any battery is its voltage, and this is what we need to know when buying a battery in a shop. But what exactly does the voltage tell us?

There are two ways of thinking about voltage. These are, in fact, two ways of telling the same story and relate directly to ideas introduced in earlier episodes.

Voltage as an electrical push

Sometimes the battery voltage is referred to as the battery e.m.f., which stands for electromotive force. This term captures the idea of the battery providing a force or push on all of the charged particles in the circuit.

Thinking about voltage as a push links up closely with the rope loop model, in modelling a larger battery is effected by pulling the rope around with a greater force.

Voltage in terms of power: energy shifted in each second

Here we need to turn to the alternative view of voltage as a measure of the power dissipated by each current in different parts of the circuit.

More precisely, it is a measure of:

First of all, attention is focused on introducing what is meant by voltage. It is important that pupils have an understanding...

Having demonstrated what is involved in measuring voltages, the pupils are now given the opportunity to make some measurements...

Many students think that electric current or electric charge (or 'electricity'), rather than energy, is stored in a battery