Is it correct to say that alpha particles are radioactive?

Wrong Track: The radioactive material gives out alpha particles, which are radioactive and therefore can do harm to human tissue, causing cancers.

Right Lines: The source gives out alpha particles. Each alpha particle consists of two protons and two neutrons. The alpha particles are potentially dangerous as they can disturb the molecular composition of human tissue, increasing the risk of cancer.

Alpha particles are not radioactive 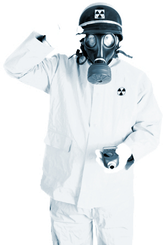 The important point to stress here is that alpha particles are not in themselves radioactive. Each alpha particle consists of two protons and two neutrons and that's it. The particles do not have some mysterious, additional property of being radioactive.

Teacher Tip: The alpha particles are the radiation: nothing more, nothing less!

Sorting out words and ideas

It is quite common for students to use the three terms radioactivity , radioactive material and radiation interchangeably.

Photons from the nucleus and elsewhere

Photons shift energy chunk by chunk on emission. Whatever the emitter, the photons deplete a store little by little, with the...