Rutherford’s scattering experiment was an ingenious piece of design and interpretation. Whilst it is not possible to reproduce the experiment in a school laboratory, it is well worth demonstrating how it was carried out using photographs, pictures and analogies.

Originally the scintillations were counted by eye: trained observers counted for a short time in a darkened room. Rutherford is reputed to have sung Onward Christian Soldiers as he waited for the next flash of light! Today, modern detectors, such as photomuliplier tubes connected to a data logger, would be used.

Much later, a similar method (deep inelastic scattering of electrons) was used to probe inside neutrons and protons and determine their structure: they are made of three smaller particles called quarks. 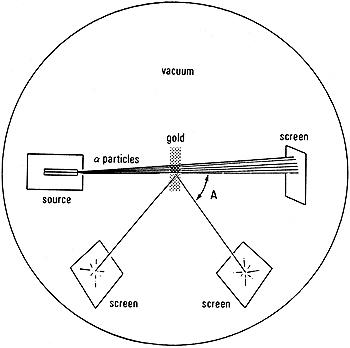 This experiment was safety-checked in December 2006

Model of the atom

At the beginning of the twentieth century, there were still some sceptics who were...

Developing a model of the atom: the nuclear atom

Students will have seen signs of electrons and positive ions (perhaps carrying a current through ionized neon or helium). On...

When Geiger and Marsden carried out the gold foil experiment in 1909, a lot was already known about alpha particles. Although...

Many students hold a range of atom models, including hybrid models consisting of combinations of different models and incorrect ideas