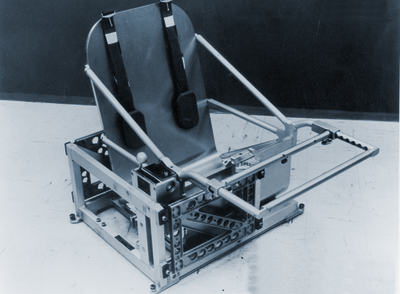 Once you have identified the forces, set the mass, then you can find the acceleration: acceleration = forcemass.

We've expended quite some effort on identifying forces; we'll spend some more showing how acceleration contributes to our abilities to predict motion. But what of the third quantity: mass? It is in many ways the hardest to get to grips with, because we can do least with it. It's just there. An object has a mass, and there is nothing we can do about it. By way of comparison, we can vary the interactions and change the forces, so getting some handle on what kinds of things they are. We can even imagine ourselves having the same kind of agency as the force – that is, acting in its place.

So how can we measure the mass of an object? Let's go to a place that's both very significant and is closer to the natural environment for any objects with mass – that is, with minimal interactions.

Astronauts are very concerned with body mass. In a cooped-up environment it's all too easy to gain or lose mass, because the inputs and outputs will be far from normal. How much of me is there? is a key question for an astronaut. With issues such as loss of bone mass to consider, a tape measure won't do! NASA solved this problem by designing a chair on springs (the image here is copyright NASA). It's as close to a pure mass measurer as you're likely to find, because it simply measures resistance to acceleration. The greater the mass, the lower the frequency of oscillation of the chair. If a more massive astronaut gets in, the greater mass reduces the acceleration that results from the force exerted by the springs: the average speed is lower; the trip time for a single out and back trip on the chair is longer; the frequency is reduced. Mass simply impedes acceleration. For a given force acting on you for a short while, if you're not moving, a larger mass results in a smaller top speed. If you are moving – a larger mass results in a smaller change in speed.

The mass of an object is a measure of its reluctance to change motion – the extent to which it impedes acceleration.

Here on planet Earth we don't need oscillating balances to measure masses. And it's a good thing – think of the cleaning up after a hurried measuring out of 400 gram of flour. Instead we rely on the gravitational field, which pulls with a steady 9.8 newton inverse kilogram (10 newton inverse kilogram is usually precise enough). Imagine dropping a 500 gram bag of flour. Earth pulls on it with a force of 5 newton. So the acceleration can be calculated:

But a cunning action on our part prevents this fall. We place some kitchen scales to provide a support force – of 5 newton. Since scales are commonly said to weigh things, we might call this the weight. Just because Earth's gravitational pull is so (nearly) constant on the surface, manufacturers of the scales can write numbers on the scale, at the rate of 100 gram for every 1 newton of support force provided.

On other planets the suppliers of kitchen scales would have to write numbers on the scale at different rates. You can find out more in the SPT: Earth in space topic and in the SPT: Forces topic.

One advantage of calling the support force the weight is that in situations where we don't provide any support force the sensation of weightlessness (whether partial or total) is naturally dealt with. You might experience this as a lift starts to descend (the floor doesn't support you as much as it once did) or, more dramatically, in amusement park rides where sometimes, and for short durations, the floor doesn't support you at all.

A paper has considered whether it is possible to jump into orbit on a body of small mass, such as Mars’s moon Deimos. The...

Gravity related to mass and 'weight'

There isn't a place on the face of the Earth where there is no gravity acting. This means that every object we ever come...

Demonstration: A brief introduction to measuring mass by balancing.