Counting the arrival of ionising radiations is a cumulative affair – the result is an ever-increasing number. Just count the blips as a result of activity in a Geiger–Müller tube – or tally up the number of tracks in a cloud chamber. The count is the accumulation of the activity of the beam over time. So far we have focused on activity, as this is proportional to power in the beam, which is more focused on our immediate interests for many radiations. However, the cumulative effect of ionising radiation is significant, as the damage done to the absorbing material depends on both activity and time.

The activity of a source is measured and quoted in bequerels (Bq), where one bequerel is 1 emission per second. As is common with units, this one is named after a scientist who did significant work on the topic, Henri Bequerel (1852–1908). The measure of the count rate will probably be lower, as we have seen, for all kinds of reasons: some radiations will not be detected as the detector will not be triggered by them (for example, not enough ions produced to generate a spark); some will be absorbed before arriving at the detector and some will miss the detector altogether. Once such allowances have been made, the count is simply the accumulation of (activity  ×  time). (The bequerel replaces the older unit of the curie, which is 3.7 × 1010  events per second. You may still find that many school sources are marked up in microcurie – that is, millionths of a curie.)

Often the concern is with the interaction of ionising radiation with biological tissue, which can self-repair but only over moderate timescales. So the rate at which the damage is done remains important: just knowing about the accumulated count is not enough. Indeed, there are many uncertainties about what the effects of exposure to beams of particular activities are, which makes it rather hard to reliably estimate risks and to offset them against benefits.

Dose and damage are different but related: they have different measures 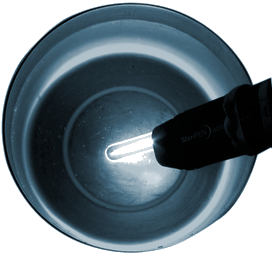 As you've already seen in episode 02, the interaction of photons with matter is not that simple. The material significantly affects the likelihood of the photon interacting as it passes through each millimetre of material. This is true even for threshold effects. So both for applications, where objects are purposefully irradiated, and for precautionary steps, where we want to limit the exposure of given slices of absorber to ionising radiations, there are other measures that incorporate more experimental knowledge of how the radiation interacts with the material.

The first of these is the gray (Gy). This is rather simple and important, because it measures the energy shifted by the radiation to each kilogram of absorber. As the damage done by the radiation is by shifting energy to strip electrons from atoms, it is easy to see that this is an important measure. Three beams, of alpha, of beta or of gamma radiations, each striking an absorber, will shift different quantities of energy to the successive slices through which they pass, because they all ionise in different ways. Indeed gamma, being essentially a photon, will show a very different pattern of ionisation, slice by slice, from the other two as they shift most energy when travelling slowest, towards the end of their passage through the slices. The pattern of ionisation by photons is one of constant fractional decay, as you noticed earlier. In the treatment of a cancer, the radiologist aims to shift 20–80 gray to the cancer in order to damage it fatally.

Biological tissue varies in its response to radiation, and there is a measure which incorporates empirical constants to capture this data. This is the sievert (Sv). It modifies the dose in gray using two factors: one for the kind of radiation (for all photons this is 1), and one for the tissue. Since the measure compares the effect of the radiation to that of being irradiated by photons, it is called the dose equivalent: that is equivalent to being irradiated by photons. A typical natural environmental exposure over the whole year is about 2 millisievert (2 mSv).

An experimental approach to spark counters

Students will see a series of demonstrations, each presented as a way of consolidating the knowledge that ions are needed for...

Where does beta radiation come from?

Demonstration: this is a general introduction to the Geiger-Müller (G-M) tube describing and explaining the basic principles...